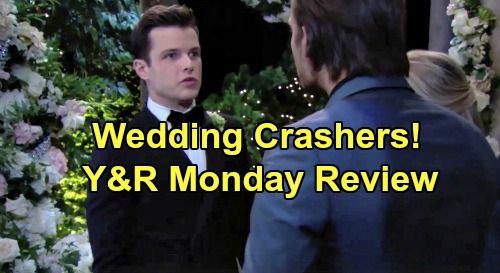 The Young and the Restless (Y&R) spoilers review for Monday, August 19, tease that Kyle Abbott (Michael Mealor) and Lola Abbott (Sasha Calle) will be thrilled that their wedding went off without a hitch. But as the reception gets underway, some issues will pop up that will threaten to put a damper on the occasion.

First off, Rey Rosales (Jordi Vilasuso will learn from Celeste Rosales (Eva LaRue) that their dad, Adrian Rosales (Jay Montalvo) has crashed the wedding. Rey will spot Adrian and implore him to leave, but Adrian won’t budge without seeing Lola first. Arturo Rosales (Jason Canela) will then reveal himself and after the three bicker for a while, Rey and Arturo will decide to stall their father’s “reunion” with Lola for as long as possible.

Eventually, Lola will notice her family congregated in the dressing room, and she’ll walk in and see Adrian. He’ll smoothly tell her that he wanted to be there on her wedding day, and that he wants the heartache to end. Lola will talk to her dad alone, and after his appeal to her, she’ll decide that he can stay, but she’s not going to have this talk with him today.

Next, Kyle will have his own wedding crasher situation, as Theo Vanderway (Tyler Johnson) arrives with Zoe Hardisty (Anna Grace Barlow) on his arm. Kyle will notice them from across the reception hall, and when he approaches, Theo will ask if Kyle remembers Zoe, and Kyle will be appalled by the whole thing. Kyle will tell Zoe that he’s glad she is ok, and Zoe will respond politely that she doesn’t hold any grudges. Ultimately, Kyle will kick Theo out, and Theo will peacefully go.

Kudos to both Lola and Kyle on handling themselves with grace and not allowing other people’s actions to ruin their wedding day. Their wedding reception will end up proceeding smoothly, with neither Lola nor Kyle getting too rattled. They’ll have their first dance, and Lola will throw her bouquet, which will eventually be caught by Mariah Copeland (Camryn Grimes). The evening will end with everyone blowing bubbles and Kola kissing.

Meanwhile, on the new episode of Y&R on Monday, August 19, Billy Abbott (Jason Thompson) will be psychologically spent at the wedding. He’ll be upset about Delia Abbott (Sophie Pollono) not ever having a walk down the aisle of her own, and he’ll even try to pick a fight with Ashley Abbott (Eileen Davidson) and Jack Abbott (Peter Bergmam) over the Abbott Exchange/Jabot merger. Finally, he’ll up and leave the reception, and head to Crimson Lights.

There, he’ll watch as Michael Baldwin (Christian LeBlanc) has a clandestine meeting with Adam Newman (Mark Grossman). Adam will tell Michael that once he’s district attorney, they’ll kick things into high gear. Michael will respond that they’ll have to be careful so they don’t end up in prison. Adam will leave after reminding Michael that their dealings aren’t a negotiation.

Afterwards, Billy will approach Michael and angrily pepper him with questions about his association with Adam, and he’ll ask directly whether it has anything to do with Kevin Fisher (Greg Rikaart) leaving town. He’ll question Michael about why he dropped Nick Newman (Joshua Morrow) as a client in the custody case, and Michael will tell him to stay out of it.

It’s pretty clear that Billy is obsessed with Adam at this point, and now it looks like his anger is being directed at both Adam and Michael. Of course, Adam and Michael are indeed up to no good, and Billy is right to be concerned, but he’s clearly taking his obsession and anger to a new, frightening level.