The Young and the Restless Spoilers: Monday, August 5 Review – Adam Causes Turmoil Around Town – Is He Really Gaslighting Billy?

BY hellodrdavis on August 5, 2019 | Comments: one comment
Related : Soap Opera, Spoiler, Television, The Young and the Restless 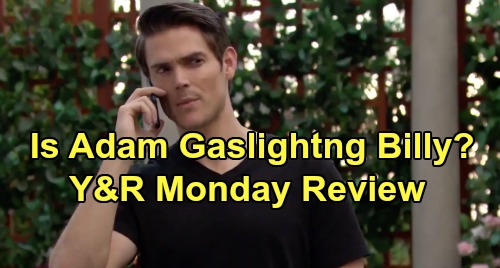 The Young and the Restless (Y&R) spoilers review for Monday, August 5, teases that Adam Newman (Mark Grossman) will stir up trouble in more ways than one. He’ll start his day bickering with Phyllis Summers (Michelle Stafford) at his penthouse. Phyllis will try to persuade Adam to sell her the Grand Phoenix Hotel for $10 million, but Adam will demand $15 million, frustrating her.

Later, Adam will call Nick Newman (Joshua Morrow) and needle him about the court’s latest ruling…that Victoria Newman (Amelia Heinle) is in violation of the order granting Adam visitation. Adam will let Nick know that he’s going to see Christian Newman (Jamie & Alister Tobias) later and tell the boy that he’s his father. This will infuriate Nick, who will later take out his frustration on Michael Baldwin (Christian LeBlanc), Adam’s new lawyer in the custody case.

Then, as Adam’s waiting for his visitation with Christian in Chancellor Park, Billy Abbott (Jason Thompson) will angrily approach Adam and start blasting him for gaslighting him with Delia Abbott’s (Sophie Pollono) doll. Adam won’t know what Billy’s talking about, but he’ll deduce that Billy’s accusing him of putting the doll in his bed, which he’ll strongly and believably deny. Billy will leave agitated, after telling Adam to cherish every minute with his son.

Once Adam and Christian meet for their visitation, things will seem to go well, as they play soccer together and Adam shows Christian a neat trick that he can use to impress his friends. Adam will lead into a discussion about fathers, and he’ll mention Connor Newman (Gunner and Ryder Gadbois) and explain that the two boys are brothers. Finally, right as Nick appears on the scene and watches, Adam will tell Christian that he’s Connor’s dad, and that he’s Christian’s real dad, too.

Meanwhile, Chelsea Lawson (Melissa Claire Egan) will notice Billy sitting at the bar at Society, drinking a bloody mary. They’ll catch up a bit, and talk will turn to Adam, as she tells Billy about how Adam offered her a deal in exchange for him ending the custody suit against Nick.

Billy will be relieved to hear that she didn’t take the deal, and he’ll tell her about how he found Delia’s doll in his bed. Chelsea will be pretty adamant that Adam would never have done something like that, but it won’t seem like Billy is too convinced. Later, at home, Billy will be unable to sleep and he’ll throw Delia’s doll under the night table in disgust.

At this point, while Adam is certainly doing some horrible things to Nick, it seems pretty clear that he’s not the person behind what’s going on with Billy. Billy’s difficulties could be entirely within his head, as there could be some simple explanations for why Delia’s doll has been “stalking” him. Billy hasn’t been sleeping, so it’s possible that he’s imagining a lot of what viewers are seeing.

But, it could be that someone else is trying to deliberately disturb Billy, in order to get him to retaliate against Adam, so we could be looking at an enemy of Adam’s who’s trying to goad Billy. If that were the case, then Kevin Fisher (Greg Rikaart) would be a possible candidate for being that person. The only problem with that theory, though, is that Kevin has left Genoa City, yet the presumed gaslighting has continued.

At any rate, it seems to be a mystery as to what’s going on with Billy at present. Y&R viewers will have to tune in to see whether Billy’s just losing it or whether someone is indeed gaslighting him.