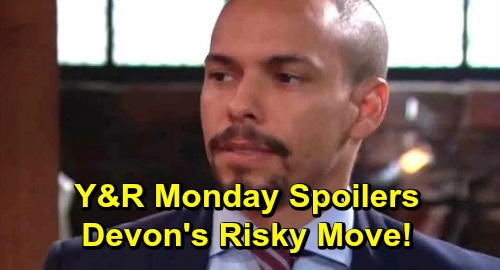 The Young and the Restless (Y&R) spoilers for Monday, December 16, tease that Victor Newman (Amelia Heinle) will be concerned about his daughter. Y&R fans know family is quite important to Victor, and he understands it’s important to Victoria Newman (Amelia Heinle) as well. If Victor sees that Victoria is spending too much time at the office, he may fear it isn’t good for her.

Victor might push Victoria to delegate a bit more and focus on the fam. He may argue that Victoria doesn’t have to prove herself to him or anyone else. Of course, Victoria actually seems to enjoy throwing herself into work. She just wishes there were more hours in a day – and that she could truly reconnect with Billy.

Despite several attempts to strengthen their bond again, Billy and Victoria are drifting apart. It’s clear that Billy needs to be honest with Victoria about his issues, but that’s just not something he’s willing to do. Victoria may continue to fret over Billy pulling away, so Victor could sense that there’s some trouble. He might pump Victoria for info as he worries about “Billy Boy” breaking her heart again.

Other Young and the Restless spoilers say Abby Newman (Melissa Ordway) will cross paths with Nate Hastings (Sean Dominic). They’ll make peace and put the past behind them, which is great news since Abby will have a hot date lined up. It’ll be nice for Abby to close this chapter as she prepares for a new one with “Chance” Chancellor (Donny Boaz).

Speaking of that new chapter, it’ll kick off soon enough. Abby and Chance will have a wonderful dinner together, but the best part will be their kiss at the end of the night. After Chance admits he’s been longing for those lips, Abby will grab him and plant the smooch. It sounds like it’ll turn out to be an excellent date and perhaps the beginning of a beautiful romance.

Sadly, another romance could be in jeopardy across town. Devon Hamilton (Bryton James) won’t tell Elena Dawson (Brytni Sarpy) about Victor Newman’s (Eric Braeden) dossier on Amanda Sinclair (Mishael Morgan), which Victor delivers in Thursday’s episode. On Monday, Devon will wrestle with what he knows and try to keep Elena from finding out how deep his obsession runs.