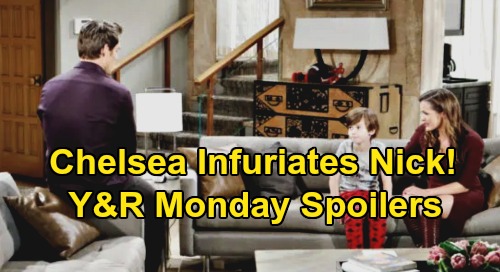 The Young and the Restless (Y&R) spoilers for Monday, December 2, tease that Devon Hamilton (Bryton James) will hope he can track down Colin Atkinson (Tristan Rogers). Y&R fans know he’s got a couple billion reasons to! Devon’s money is still missing, so he needs to find Colin and try to score info that could lead him to it.

Of course, Devon also wants to see Colin locked up for this ruthless scam. It was wrong on so many levels. Devon had been hit hard by the loss of two people close to him. He lost Hilary Hamilton (Mishael Morgan) last year and Neil Winters (Kristoff St. John) suddenly passed away just a few months ago. Devon was so affected by those losses that he struggled with panic attacks, so it was downright vicious to target him and inflict more pain.

Amanda Sinclair’s (Mishael Morgan) uncanny resemblance to Hilary was part of that pain, and the nature of her involvement has been called into question repeatedly. After Amanda met with Devon for the first time, she left an irritated message and was seemingly caught off guard by this part of the plot. However, Amanda chose to stick around knowing how much distress her face was causing. It looks like she’ll deal with more backlash for that in Monday’s episode.

Elena Dawson (Brytni Sarpy) will likely be the one ripping into Amanda again. Her anger is justified, especially since Amanda implied she was a gold-digger! Whether Elena’s doing the bashing or not, The Young and the Restless spoilers Nate Hastings (Sean Dominic) will rush to Amanda’s defense. He might point out that Amanda stuck around to save his medical license – and she succeeded. Nate sees the good in Amanda and will continue to push for her permanent stay in Genoa City.

While Nate shuts down complaints about Amanda, Chelsea will do something shocking. She’ll make a bold move, which could mean a literal one. Adam Newman (Mark Grossman) wants Chelsea to move in the penthouse and show a real commitment to Connor. It could give the kid a greater sense of stability, and that would certainly be helpful right now.

Staying at Adam’s for a few days is one thing; staying there every night is quite another. Nick may wonder if Chelsea’s really staying for Connor…or for Adam. “Chadam’s” bond is definitely growing stronger, but Chelsea might be in denial about that. Regardless, she may tell Nick this is how it has to be and convince herself the move’s for Connor alone. In reality, the last straw could be rapidly approaching for “Chick.”