BY hellodrdavis on December 2, 2019 | Comments: one comment
Related : Soap Opera, Spoiler, Television, The Young and the Restless 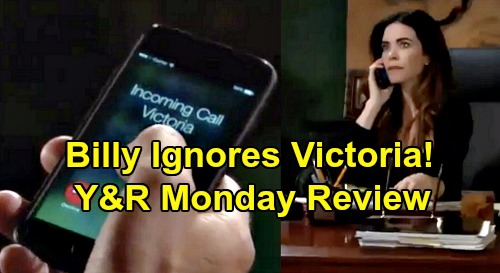 The Young and the Restless spoilers review for Monday, December 2, tease that Devon Hamilton (Bryton James) will about lose it when he learns from Chance Chancellor (Donny Boaz) that Colin Atkinson (Tristan Rogers) is on the lam. This will lead him to lash out at Elena Dawson (Bryni Sarpy), who will caution him against being revenge-minded. But Elena will keep her cool with Devon, even though he says a few things that clearly irritate her. They’ll decide to get some fresh air, and they’ll head to the Grand Phoenix.

At the Grand Phoenix, Amanda Sinclair (Mishael Morgan) will be watching a tracking program on her phone that’s monitoring someone’s whereabouts when Nate Hastings (Sean Dominic) appears. He’ll give her his final payment for her legal services, when along will come Devon and Elena, who will be immediately and openly hostile toward Amanda.

Devon will start right in on Nate for associating with Amanda, and Amanda will not tolerate it and will walk off, saying she’s had enough. Nate will defend himself and Amanda, and while Devon walks off to take a call, Elena will lay into Nate for defending Amanda. She’ll really let him have it, clearly displacing her earlier anger toward Devon. Nate will be mortified by Elena’s stance on Amanda and he’ll sigh heavily after Elena storms off.

Meanwhile, on the new episode of Y&R on Monday, December 2, Billy Abbott (Jason Thompson) will find himself feeling introspective and a bit lost. First, he’ll meet with Victoria Newman (Amelia Heinle) at Society. She’ll be running late due to a work commitment – she’ll have just closed a big deal – and Billy will be happy for her. She’ll try to help him figure out what to do with this next chapter of his life, but they won’t have much luck and he’ll leave as she gets on a business call.

Billy will have told Victoria that he’s going to talk with Jack Abbott (Peter Bergman) for some brotherly advice, but he’ll head to some dive bar instead to drink alone. He’ll be sitting at a table contemplating life when Amanda shows up fresh from her altercation with Devon and Elena. Billy will stare, and Amanda will deduce that he must have known Hilary Hamilton (Mishael Morgan).

The two will make introductions, then Billy will intervene as some obnoxious guy tries to hit on Amanda. Amanda will offer to buy Billy a drink to thank him, but he’ll politely refuse and return to his table. Amanda will leave, while Billy deliberately ignores a call from Victoria. Clearly, Billy is lost and is feeling like he doesn’t fit anywhere, and his coping skills leave a lot to be desired.

Finally, at Nick Newman’s (Joshua Morrow) place, he and Chelsea Lawson (Melissa Claire Egan) will argue about Adam Newman (Mark Grossman). Nick will agree with Chelsea that Connor Newman (Judah Mackey) should always come first, but he’ll think that Adam is using the situation to his advantage, especially when he hears that Adam wants Chelsea to move into the penthouse.

Nick will huff out of the house to get some air, and when he returns, Chelsea will be packing to go to Adam’s. She’ll say that “he needs me,” and Nick will wonder if she’s referring to Connor or Adam. He’ll proceed to say that her leaving is unfair to him, but that he agrees that Connor should be put first. They’ll embrace, but Nick won’t be happy as Chelsea leaves.