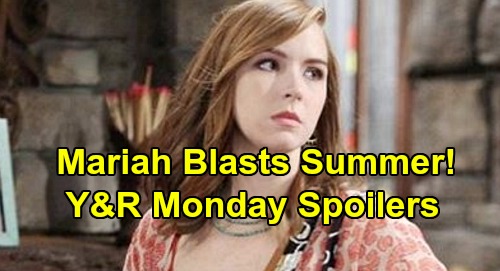 The Young and the Restless (Y&R) spoilers for Monday, December 9, tease that Devon Hamilton (Bryton James) just won’t be able to get Amanda Sinclair (Mishael Morgan) off his mind. Y&R fans know Devon recently had a startling dream about Hilary Hamilton (Mishael Morgan). It turned into a nightmare after he kissed Hilary and pulled back to see that she was actually Amanda.

Clearly, Amanda’s lingering presence in town is taking a toll on Devon. Elena Dawson (Brytni Sarpy) was right to worry! The Young and the Restless spoilers say Devon will do his best to focus on his current romance, but Amanda will keep flooding his thoughts. He hates this woman’s guts, but her face looks just like someone he loved dearly. That has to be a difficult inner battle for Devon, but he may feel like he has to tackle it alone.

Elena was hesitant to get in too deep with Devon before he finally pushed past the worst of his Hilary grief. She felt like Devon was stuck on his late wife – which Elena understood, but it still made her wary of moving their relationship forward. Now they’re committed and in love, but that doesn’t mean things will be smooth sailing. Elena may soon sense that Amanda is becoming a problem just like she feared.

Speaking of problems, Mariah Copeland (Camryn Grimes) will think Summer Newman (Hunter King) could become one. She’ll probably hear about Summer and Theo Vanderway’s (Tyler Johnson) breakup, which could be why she’ll confront Summer and offer a warning. Mariah may be concerned that a single Summer could pose a bigger threat to Kyle Abbott (Michael Mealor) and Lola Abbott’s (Sasha Calle) marriage.

Other Young and the Restless spoilers say “Chance” Chancellor (Donny Boaz) will get an interesting offer, which will ensure his stay in Genoa City becomes permanent. Since Abby finally succeeds in firing Phyllis Summers (Michelle Stafford) on Friday, she may offer Chance the head of security job on Monday. Abby would undoubtedly like working with her handsome crush.

Of course, Abby will also have to answer for the bag of stolen jewels she drops on Friday. It seems the string of jewelry robberies was a scam designed to get rid of Phyllis. On Monday, December 9, Chance may decide he’s impressed by Abby for pulling it off. Chloe Mitchell (Elizabeth Hendrickson) assured Abby there was no bad boy lurking under the surface, but we’d say she’s wrong about that. If this Vegas mystery is any indication, Chance seemingly has a bit of a wild side after all.