BY Heather Hughes on July 26, 2019 | Comments: one comment
Related : Soap Opera, Spoiler, Television, The Young and the Restless 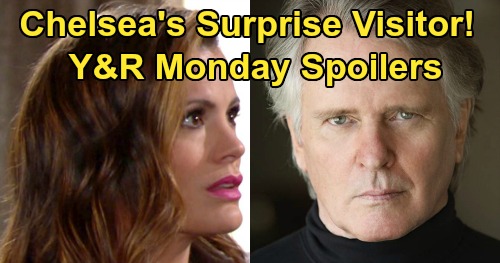 The Young and the Restless (Y&R) spoilers for Monday, July 29, tease that Adam Newman (Mark Grossman) will face Rey Rosales’ (Jordi Vilasuso) wrath. Friday’s episode pushes Rey to the limit, so he finally packs up his stuff and moves out of the cottage. Rey leaves Sharon Newman (Sharon Case) because he just doesn’t see a positive outcome happening at the end of all their struggles.

Of course, Adam has been at the center of those struggles. Sharon’s connection with Adam is undeniable, but Rey feels like her ex just has a way of sucking her back in again and again. On Monday, Rey will unleash his fury. He’ll rip into Adam for causing the destruction of his relationship and hurting nearly everyone else in town. Rey will pretty much think Adam’s scum and won’t be afraid to let him know it.

However, Adam doesn’t really care what most people think of him – especially not Rey. He’s always viewed Rey as some glorified security guard who isn’t worthy of Sharon. Adam will likely suggest that Sharon will be better off without Rey. He may taunt Rey by suggesting that he might make his move. Adam is still hung up on Chelsea Newman (Melissa Claire Egan), but Sharon could certainly be an option for him soon.

Y&R fans can expect temptation for Sharon in the coming weeks, so she may struggle now that she’s single. There’ll be nothing to stop her growing connection with Adam – and if you ask just about anyone in Genoa City, that connection is dangerous! Over with Chelsea, she’ll deal with a face from her recent past. Daryl Tulane (Gordon Thomson) will debut, so expect this quirky character to shake things up.

The Young and the Restless spoilers say Daryl will have a surprising agenda when he flies in from Baton Rouge. He’ll have a little chat with Chelsea to explain why he’s in GC and what her next move should be. Daryl is also linked to Anita Lawson (Catherine Bach), so she may have something to do with this intriguing visit.

Nick Newman (Joshua Morrow) will get caught in the middle of the chaos as well, so The Young and the Restless fans won’t want to miss all the action. We’ll give you updates as other Y&R news comes in. Stay tuned to the CBS soap and don’t forget to check CDL often for the latest Young and the Restless spoilers, updates and news.