BY Heather Hughes on November 8, 2019 | Comments: one comment
Related : Soap Opera, Spoiler, Television, The Young and the Restless 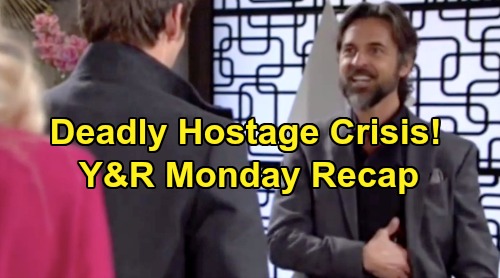 Cane will bicker with Chance, but he’ll ultimately confess that Jill Abbott (Jess Walton) now suspects Colin Atkinson’s (Tristan Rogers) involvement. He’ll also have questions about why Chance has been MIA for so long. Chance will talk about the case he’s about to solve as his phone chimes with a notification. He’ll get a text about the subject being inside the hotel.

Down in the lounge, Simon will appear and corner Nick for a conversation. Chelsea will be busy calling Anita Lawson (Catherine Bach) to get the $1 million she gave her. She’ll insist that she’s in danger along with Connor Newman (Judah Mackey). At the ranch, Adam Newman (Mark Grossman) will stop by with Connor to ask about going to the farm. Since Victor now owns it, Adam will hope to clear their visit with him.

Victor will get updates on Chelsea’s suggestion and how she’s worked out her trust issues with Adam. He’ll think Chelsea had a good idea and will offer to retrieve his pocketknife. Victor will suggest Connor can add his initials in the elm tree.

Once Victor steps out, Connor will mention wanting Chelsea to come along with them. Adam will provide an explanation for why Chelsea can’t, but he’ll be willing to stop by the hotel and ask anyway. As Adam and Connor head out, Victor will wish them well on their trip.

At the Grand Phoenix again, an agent will receive instructions from Chance. They’ll plan to grab their subject when he exits the building. Over with Phyllis Summers (Michelle Stafford), she’ll talk to Abby about the security of their servers. Phyllis will snatch up her computer when Abby tries to take a look at it. After showing Abby some of the new features, Phyllis will bring up Nick and how Abby wants to keep her away from him. Abby will snap that Phyllis should cross the line and see what happens.

Phyllis will run into Amanda just outside her suite door and enter the room with her. They’ll find Chance, who’ll assume Amanda is the lawyer he supposedly had. Chance will insist he’s doing a sting operation and needs them to get out, so Phyllis will express concern over the guests. After Chance promises everything’s under control, he’ll be texted a pic of Simon.

Back with Chelsea, she’ll be terrified over Adam and Connor’s arrival. Y&R spoilers say Chelsea will try to get rid of them quickly, but Adam will sense something’s wrong. He’ll urge Connor to go sit down while they talk alone. When Simon walks up to them and mentions the business he has with Chelsea, Adam will insist it can wait.

Next, Simon will get suspicious of the armed agent, so things will take a dangerous turn. He’ll tell Chelsea her time’s up and eventually pull out his gun. Simon will urge everyone to exit the building, but Adam will refuse. He’ll contend that Simon will have to shoot him if he expects him to leave without his family.

As a scared Connor cowers behind his mom, Simon will hold Chelsea responsible for the current chaos. He’ll note that he’s going to collect what’s his and leave town, but he has to find a way to resolve this. Over with Abby, The Young and the Restless spoilers say she’ll clear the guests out and spot the panic button.

Back with Phyllis, she’ll let Chance know the surveillance equipment is set up in her room. Phyllis will lead the way, so her spy games are about to come in handy! At the ranch again, Victor will speak with Nick about his political aspirations. He’ll ask if Nick’s ashamed of the family name, but Nick will insist that’s not the case. This is just something Nick wants to do on his own.

Afterward, Nick will hear about the trip Chelsea suggested for Adam and Connor. He’ll leave Chelsea a voicemail about wanting to talk, but she’ll be caught up in all the Simon drama. The Young and the Restless spoilers say another great episode’s on the way. We’ll give you updates as other Y&R news comes in. Stay tuned to the CBS soap and don’t forget to check CDL often for the latest Young and the Restless spoilers, updates and news.