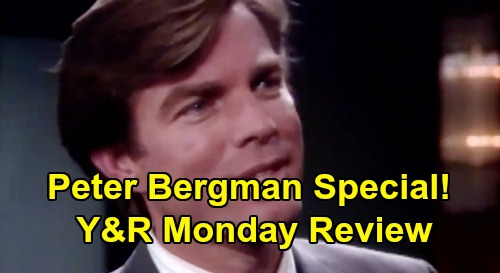 The Young and the Restless spoilers review for Monday, November 25, tease that Y&R fans will be treated to the Peter Bergman’s 30th anniversary special – Jack Abbott (Peter Bergman) will bid good morning to Traci Abbott (Beth Maitland), and Traci will have some surprises for her brother. First, she’ll tell Jack that Ashley Abbott (Eileen Davidson) was able to leave Paris earlier than anticipated so she’ll be home for Thanksgiving soon. And second, she’ll show him the finished draft of the family memoir.

Jack will be thrilled, and while Traci and Billy Abbott (Jason Thompson) pick up Ashley at the airport, Jack will sit down with the memoir and start reading. He’ll begin with the preface, which will describe the memoir as a labor of love and end with “We are the Abbotts, and this is our story.”

From there, Jack will read various chapters of the memoir, which will be interspersed with his memories of pivotal times in his family’s life. Jack will start by reading about what John Abbott (Jerry Douglas) meant to the family. The memoir will describe John as the touchstone of the Abbotts and the person whose approval they all sought.

Jack will then flash back to a time when he told John that he’s returning to Jabot, as well as to a time when Dina Abbott (Marla Adams) made one of her many returns over the years wanting to reconcile with John. He’ll also remember when Jill Abbott (Jess Walton) triumphantly announced to him that she was moving in with John.

Jack will also stop to remember himself telling John as he lay dying that he’d look out for the family, and he’ll recall when Dina told him that she loved him and always would shortly after her Alzheimer’s diagnosis. The memoir will then move to the story of Jabot, John’s “first born.” Jack will remember pivotal clashes over the company with Victor Newman (Eric Braeden), then with Jill and Ashley.

And in an emotional moment, he’ll remember showing Ashley the “blood Abbott” clause and coldly telling her that she couldn’t ever take his job as CEO because she was “illegitimate.” Jack will be visibly shaken by the memory, but he’ll be comforted by the memoir’s assertion that John would approve of them now running the company together.

Next, Jack will read about the various clashes between himself and Victor over the years. He’ll remember several incidents with Victor, including when Victor had a heart attack during a confrontation with him, and when he threw a chair through the window to prove a point. The memoir will note that the two men are now getting along, but that time will tell whether that’s a true paradigm shift or just the calm before the storm.

Jack will then read about Abbott romances, and Jack will have several flashbacks, including when he proposed to Nikki Newman (Melody Thomas Scott) and when he was trying to resist a flirtatious Phyllis Summers (Michelle Stafford). He’ll also face some more difficult memories, including when he told Nikki about meeting the child to whom their baby’s heart was donated, and when Phyllis had cheated on him.

Traci, Ashley, and Billy Abbott (Jason Thompson) will arrive back from the airport, and Jack will read some more excerpts aloud for Billy and Ashley. He’ll flash back to giving Kyle Abbott (Michael Mealor) his grandfather’s cufflinks, as well as to some poignant scenes, including when he finally apologized to Ashley for enacting the Abbott clause.

Jack will read the final words of the book aloud for them to hear: “Thus our story will live on, not just in these pages, but in our traditions, our memories, and our hearts.” Everyone will be teary-eyed and soon Kyle, Dina, and Abby Newman (Melissa Ordway) will join them. Jack will offer a round of applause for Traci, and Traci will in turn applaud Jack.

Finally, Jack will then note to everyone that they are all a part of him, a part of who he is, and he’ll say that he’s grateful for every moment in the past and every moment ahead. He’ll offer a toast to all of the Abbotts.