The Young and the Restless Spoilers: Monday, October 14 – Nick Rises to the Challenge – Phyllis’ Cover-up – Sharon & Rey’s Next Step 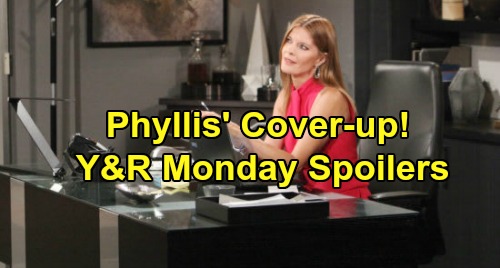 The Young and the Restless (Y&R) spoilers for Monday, October 14, tease that a new challenge is on the way for Nick Newman (Joshua Morrow). Y&R fans know there have been multiple suggestions about Nick getting into politics. Nick downplayed the idea, but it seems likely he’ll indeed run for office eventually.

There’s no word yet on what position Nick might seek, but this is an interesting writing choice. Some viewers have complained about Nick not being very likable over the last few months. Making him a politician…well, it probably isn’t going to help. This will just give Nick a bigger platform to act superior, but maybe he can at least do some good. Nick does some nice charity work, so there’s that!

Other Young and the Restless spoilers say Phyllis Summers (Michelle Stafford) will hide what she’s been up to. She won’t want anyone finding her trail, so it sounds like she’ll stay tight-lipped about that Vegas trip. Phyllis is hoping to bring Adam Newman (Mark Grossman) back to town, but it’ll take a little more wok to make it happen.

As for Cane Ashby (Daniel Goddard), perhaps we’ll see the aftermath of his kidnapping. Cane is lured into a trap in Friday’s Y&R episode, which leads to him getting knocked out cold and dragged somewhere. Will Monday reveal Cane’s captor or will the show drag it out a bit longer? We’ll have to wait and see, but Cane definitely has more shockers coming up this week.

Back in Genoa City, Sharon Newman (Sharon Case) and Rey Rosales (Jordi Vilasuso) will continue their awkward reunion steps. Their last evening together turned into a date, so that’s great news for “Shey” fans. Rey will soon head to Crimson Lights for a cup of joe, but he’ll bring up the topic of a second date, too. It looks like Sharon and Rey will make some plans, so they’re on the right track.

Also early next week, The Young and the Restless spoilers say Lola Rosales (Sasha Calle) will be nauseous on the job. Certain items on the menu will leave her particularly disgusted. Lola will deal with some dizziness as well, so Abby Newman (Melissa Ordway) will think it all adds up to a possible pregnancy. It’ll leave Lola worried about potentially dropping a baby bomb on Kyle.