The Young and the Restless Spoilers: Monday, October 21 – Nick and Adam Get Bad News About Connor – Devon Blasts Amanda 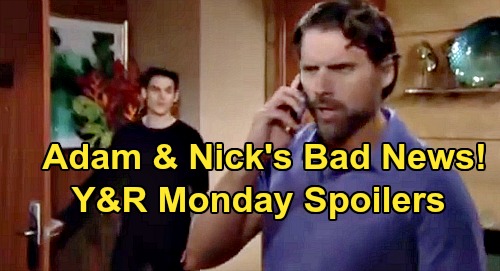 The Young and the Restless (Y&R) spoilers for Monday, October 21, tease that Devon Hamilton (Bryton James) will unleash his fury. He’s done his best to put up with Amanda Sinclair (Mishael Morgan) and this whole will situation, but he’ll finally lose it. The pressure of all this will become too much for Devon, so he’ll take all his anger out on Amanda.

Of course, Amanda will certainly deserve some of it. Devon can tell that she’s just as suspicious of all this, but she’s being stubborn and continuing to fight for an uncooperative client. The Young and the Restless spoilers say the conflict will explode, so Amanda may let Devon have it, too. They all just need some solid information – and that’s exactly what Cane Ashby’s (Daniel Goddard) hoping to bring them.

On Friday’s Y&R episode, Cane awakens in a dark room and eventually spots an envelope on the table. He opens it to reveal Katherine Chancellor’s (Jeanne Cooper) original will pages – at least that’s what he thinks they are. This entire ordeal is incredibly shady. If these will pages were legit, why would Cane need to be knocked out and dragged off by someone mysterious? What’s with all the secrets?

Furthermore, it doesn’t make any sense for Katherine to leave Cane her fortune. Nevertheless, Cane will return home and give Jill Abbott (Jess Walton) more details about his Vegas trip. On Monday, Jill will be horrified by what Cane’s been through, but she’ll be glad he got something out of it. It’s tough to believe these pages are the real deal though, so Devon may think this is outrageous.

In the meantime, Nick Newman (Joshua Morrow) will show up at Adam Newman’s (Mark Grossman) door. The brothers will get into an argument about Adam’s mistakes as well as what his absence is doing to Connor. After Chelsea Newman (Melissa Claire Egan) gets in touch, Nick and Adam will learn Connor landed in the hospital. If that doesn’t bring Adam back to GC, nothing will!

Thankfully, The Young and the Restless spoilers say Adam will indeed come home and give Connor the support he needs. Once Connor’s got his dad back, he should settle down and learn to be a normal kid again. We’ll give you updates as other Y&R news comes in. Stay tuned to the CBS soap and don’t forget to check CDL often for the latest Young and the Restless spoilers, updates and news.