The Young and the Restless Spoilers: Monday, October 21 Review – Kyle and Lola Head For Real Trouble – Cane Back With Original Will 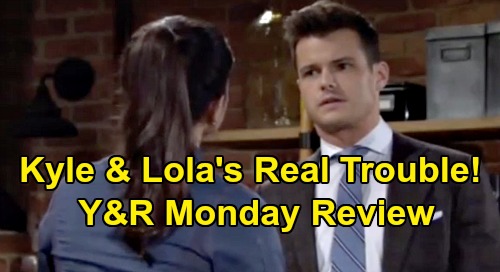 The Young and the Restless spoilers review for Monday, October 21, tease that Adrian Rosales (Jay Montalvo) will still be hanging around Genoa City. He’ll be blowing through the money that Kyle Abbott (Michael Mealor) gave him at The Grand Phoenix as he hangs out and chats up the other patrons. Rey Rosales (Jordi Vilasuso) will notice him doing his thing and blast him for his choices and for taking money from Kyle, which Adrian will let slip.

Turns out, Theo Vanderway (Tyler Johnson) will notice Adrian and Rey arguing, and later Theo will approach Adrian. The two will get to know each other, and Theo will work Adrian for information about Lola Abbott (Sasha Calle) and her childhood. Of course, Adrian won’t know much about that, but he’ll share what he knows, which is that Lola was headstrong and very much into Tae Kwan Do as a girl.

Later, Theo will show up at Society and make his way into the kitchen to see Lola, who will chastise him for thinking that he’s going to smooth things over with Kyle by coming to see her. He’ll end up playing her a bit and artfully weaving some Tae Kwan Do talk into the conversation. Interestingly, a rapport is developing between Theo and Lola, and it’s important to note that Lola still spent time with Theo despite Kyle’s previous demand that she stay away from him.

While all of this is going on, The Young and the Restless spoilers say Kyle will be at Jabot with Summer Newman (Hunter King). They’ll share a good rapport of their own, and Summer will support Kyle as he deals with Billy Abbott’s (Jason Thompson) latest show of disrespect to him. Summer will then notice that Kyle has been looking at houses online, and she’ll make some suggestions, including one particular home with a chef’s kitchen that looks perfect. They’ll definitely be on the same page when it comes to the “perfect” house.

At the end of the day, Kyle and Lola will look at houses together at the apartment. Kyle will run some by Lola, and she’ll poo-poo the house with the chef’s kitchen that Summer liked. It will seem to disappoint Kyle, and the two of them won’t exactly see eye-to-eye on the size of house they’re looking for. They just won’t gel as they’re looking, and Kyle will call a stop to their search for the night.

Unfortunately, it seems like the more time goes by, the more Kyle and Lola find that they aren’t compatible with each other. They don’t seem to see it clearly yet, but there’s a disconnect between them that seems to be rooted in their very different backgrounds and respective comfort zones. And at the same time, Summer and Kyle seem to understand each other very well, with their commonalities making their friendship stronger. It seems like a real recipe for disaster.

Meanwhile, on the new episode of Y&R on Monday, October 21, Cane Ashby (Daniel Goddard) will return to Genoa City with the original will papers in hand. He’ll meet briefly with Amanda Sinclair (Mishael Morgan), who will be fresh from a major argument over familiar territory with Devon Hamilton (Bryton James). Cane will give Amanda the pages and he’ll want to have them authenticated, but Amanda will think that it’s too late for that since the statute of limitations for contesting the will has run out. She’ll advise Cane to just let it go.

Of course, Cane’s not going to be able to do that, especially after what he went through to get the pages to the will. Clearly, something major is going on if Cane had to be knocked out and dragged to a room unconscious in Las Vegas. It certainly looks like Cane will be taking steps soon to get to the bottom of which will/will pages are the real wishes of Katherine Chancellor (Jeanne Cooper).