The Young and the Restless Spoilers: Mother-of-the-Bridezilla Celeste Destroys Kyle and Lola’s Relationship – Wedding in Jeopardy 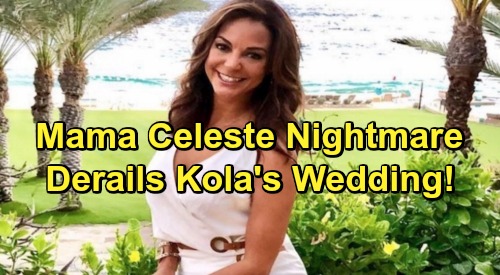 The Young and the Restless (Y&R) spoilers tease that Kyle Abbott (Michael Mealor) and Lola Rosales (Sasha Calle) have a huge obstacle headed their way. For once, it won’t be Summer Newman (Hunter King). Of course, Summer will still cause a little drama here and there. She wouldn’t be Summer if she didn’t!

However, the real summer hurdle for Kyle and Lola will be a bit more surprising. The Young and the Restless spoilers confirm that an engagement is indeed looming for “Kola.” They’re unbelievably happy together, so Kyle will pop the question and get ready to spend the rest of his life with Lola. Unfortunately, that decision will invite a potential wrecking ball to smash right into them.

Y&R fans can expect Celeste Rosales (Eva LaRue) to shake things up for Lola and Kyle. Once she learns her daughter’s getting married, Celeste should have some concerns. Lola hasn’t even known Kyle all that long, and his history with Summer has proved problematic. Celeste hasn’t had a chance to meet Kyle yet, but she’ll think it’s high time that she introduced herself.

Rey Rosales (Jordi Vilasuso) and Arturo Rosales (Jason Canela) have always been protective of Lola. Celeste will want to protect Lola as well, so she may be wary of Kyle and cause some conflict. Even so, The Young and the Restless spoilers say Celeste will be a bubbly and fun character. She’ll certainly make her mark on Genoa City right away.

Celeste has a big and bold personality, which will become evident as she gets involved with wedding plans. Once Celeste accepts that this is what Lola wants, her attempt to take over all the arrangements will strain her relationship with her daughter. That’ll end up straining Lola’s relationship with Kyle, too.

You’ve probably heard of Bridezillas, but it sounds like a Mother-of-the-Bridezilla just might be worse! The Young and the Restless spoilers say Celeste will spark some chaos as Lola and Kyle’s big day approaches. Will they actually make it down the aisle or will Mama Rosales derail their whole romance?

Some great scenes are coming up after Celeste’s debut on June 26. We’ll give you updates as other Y&R news emerges. Stay tuned to the CBS soap and don’t forget to check CDL often for the latest Young and the Restless spoilers, updates, and news.