The Young and the Restless Spoilers: Mysterious New Character Daryl Tulane Hits GC – Chelsea’s Past Comes Back to Bite Her 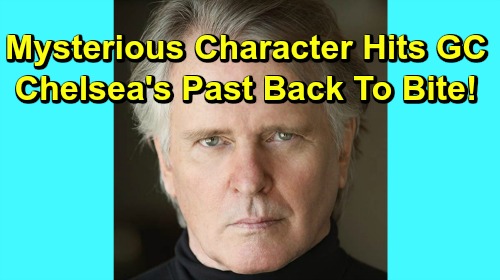 The Young and the Restless (Y&R) spoilers tease that a mysterious new character is headed to Genoa City. According to Soap Opera Digest, Gordon Thomson (ex-Adam Carrington on Dynasty, ex-Mason Capwell on Santa Barbara) has been cast as Daryl Tulane. He’ll show up onscreen starting July 29 and will be around for several episodes.

Y&R is staying tight-lipped on the details, but they did reveal that Daryl is connected to Chelsea Newman (Melissa Claire Egan). She met Daryl during her time away from GC, so it sounds like he’ll have a good reason to seek her out. It’s doubtful Daryl would just track Chelsea down to catch up, so big trouble is most likely brewing.

There are some interesting options to consider here. The first one is that Daryl could be a friend or relative of Chelsea’s husband. The Young and the Restless spoilers say Calvin Boudreau (John Burke) will die, thanks to a sudden medical crisis.

Of course, the timing is awfully convenient. It seems suspicious, doesn’t it? If it’s suspicious to Y&R fans, you can bet it’ll be suspicious to Calvin’s loved ones, too.

Daryl might arrive in town to do some grilling and investigating. He may suspect Calvin didn’t die of natural causes. If Adam or another character is to blame for Calvin’s death, Daryl’s arrival could cause issues for more than just Chelsea.

Then again, Daryl might be connected to Chelsea and Chelsea alone. He could be someone she conned before she finally settled down with Calvin. Did Chelsea scam Daryl out of money and bolt?

She told Adam Newman (Mark Grossman) that she was in survivalist mode for a long time after he died. It wasn’t until Chelsea met Calvin that she was able to find peace and stability.

Chelsea could’ve easily duped a few men along the way to finding that stability. Her actions could come back to bite her, which might work to Adam’s advantage. If he can protect Chelsea and get rid of this guy, Adam would earn some points. Daryl would be no match for someone as manipulative as Adam.