The Young and the Restless Spoilers: Nate & Abby On The Rocks – Will He Leave Her For Amanda?

BY hellodrdavis on October 15, 2019 | Comments: one comment
Related : Soap Opera, Spoiler, Television, The Young and the Restless 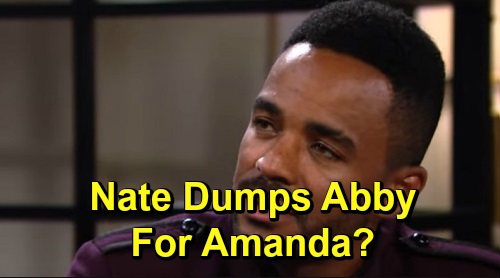 The Young and the Restless spoilers tease that Abby Newman (Melissa Ordway) will soon be experiencing some difficulties in her relationship with Nate Hastings (Sean Dominic). As Y&R viewers know, Abby and Nate started dating earlier this year, shortly after her breakup from Arturo Rosales (Jason Canela), and they started out happy together and strong. Things seemed to be going well, and even Victor Newman (Eric Braeden) approved of Abby’s choice in Nate, which is a pretty big deal in and of itself.

But Nate and Abby have had some rocky moments between them. First off, Abby got spooked pretty early in their relationship, when Nate innocently suggested that they go away on a trip together. That prompted Abby to pull away from Nate and give him a big spiel about how they were “just dating” and weren’t anything serious or lasting. This seemed to be in reaction to the bad ending that Abby had with Arturo – perhaps she was protecting herself from getting hurt again.

Abby seemed to get over it, though, and she and Nate worked through that particular difficulty. They’ve seemed to be happy together, but then the whole situation involving Victor’s death ruse came about. Both Nate and Abby willingly participated in the ruse, and Nate actually had a large role since he’s Victor’s personal physician. And ever since Victor re-emerged and declared himself to be alive, the family and Nate have been dealing with the fallout.

Nate in particular seems to regret his decision to get involved in convincing people – including some of Victor’s own family members – that Victor had died. Nate has seen first-hand the pain that the whole thing caused to Summer Newman (Hunter King), and now Connor Newman (Judah Mackey) is experiencing serious difficulties in part because of the ruse. Nate seems to be feeling like he just doesn’t want to be a part of the Newman drama anymore.

At any rate, Nate’s disillusioned by the Newmans, and this appears to be taking a strain on his relationship with Abby, who has publicly defended her father’s decision to fake his own death. Nate and Abby just don’t see eye-to-eye on the matter, and Y&R spoilers indicate that this could be a breaking point in their relationship, as Abby and Nate are shown in the new Y&R weekly promo discussing whether their romance should end.

And while this is going on, Nate will find himself interested in someone else…Amanda Sinclair (Mishael Morgan). According to Y&R spoilers, Nate will strike up a conversation with Amanda during which he seems interested in getting to know her better. Of course, this is likely a ruse on Nate’s part to scope out Amanda and try to glean information from her that might help Devon Hamilton (Bryton James) out. But there could also be more to it – could we see Nate becoming attracted to Amanda, even despite himself?

That could certainly be where TPTB are going with this storyline. It would surely cause Devon some real discomfort if Amanda were to stick around Genoa City, and it doesn’t seem that the character isn’t going anywhere anytime soon. She’ll need a reason to stay after the mess with Katherine Chancellor’s (Jeanne Cooper) will gets resolved, which could be happening soon since the statute of limitations for challenging the will have run out.

At any rate, it seems that Nate will at least have something and someone different to focus on in the near future, other than Abby. Do you think Nate and Abby will officially call it quits? Stay tuned to the CBS soap and don’t forget to check CDL often for the latest Young and the Restless spoilers, updates, and news.