The Young and the Restless Spoilers: Neil’s Heartbreaking Will Reading – Huge Curveballs for Loved Ones Left Behind

BY Marcy Cohen on May 24, 2019 | Comments: one comment
Related : Soap Opera, Spoiler, Television, The Young and the Restless 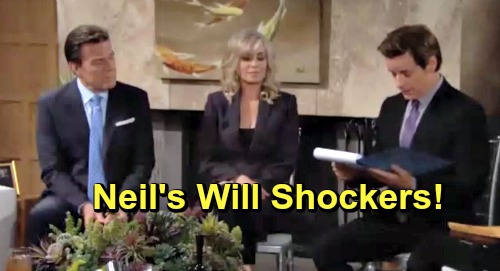 The Young and the Restless (Y&R) spoilers tease that Devon Hamilton (Bryton James) will face a difficult task. He hasn’t been ready to face the closure that’ll come with Neil Winters’ (Kristoff St. John) will reading. Losing Neil so soon after Hilary Hamilton (Mishael Morgan) was a tough blow, so it’s been hard for Devon to cope. It was easier to push that to the back of his mind than to deal with it.

Fortunately, Michael Baldwin (Christian LeBlanc) knows this has to be done. He pushed Devon to make it happen and will keep pushing until it all comes together. The Young and the Restless spoilers say Neil’s loved ones will gather for the reading on May 29. It’ll be a somber occasion, but there’ll also be a sense of curiosity in the air. Some surprising faces will be on hand to hear what Neil left behind.

Of course, there’ll be some people you would expect as well. Neil just wanted to make sure everyone who had meaning in his life had something to remember him by. His bequests will be shocking in some cases. Neil’s a man who lived his life with lots of love, so his final wishes should be a reflection of that.

The list of attendees will naturally include Devon, Lily Ashby (Christel Khalil) and Cane Ashby (Daniel Goddard). Cane and Lily will face some awkwardness, but they’ll try to deal with it and keep moving forward. What’ll matter most in this moment is hearing Neil out and remembering a great guy.

Dr. Nate Hastings (Sean Dominic), Ana Hamilton (Loren Lott), Sharon Newman (Sharon Case), Jack Abbott (Peter Bergman) and Ashley Abbott (Eileen Davidson) will be there. Y&R fans will see Victor Newman (Eric Braeden) and Nikki Newman (Melody Thomas Scott) as part of the group, too. All of these people touched Neil’s life in one way or another, so he’ll have something special for each of them.

The Young and the Restless spoilers say this will indeed bring the closure Devon feared, so the loss may hit him all over again. However, it’ll be good for Devon in the long run. Devon can start to let go of the past and focus on the future, but he’ll find it to be a lengthy process.

Y&R viewers won’t want to miss all the drama ahead. We’ll give you updates as other news comes in. Stay tuned to the CBS soap and don’t forget to check CDL often for the latest Young and the Restless spoilers, updates, and news.