The Young and the Restless Spoilers Next 2 Weeks: Adam Hunts for Chloe – Nick Recruits Rey – Sound of Wedding Bells

BY Heather Hughes on May 25, 2019 | Comments: one comment
Related : Soap Opera, Spoiler, Television, The Young and the Restless 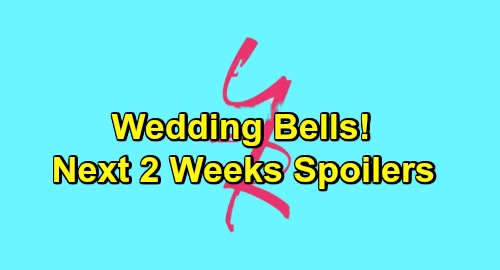 The Young and the Restless (Y&R) spoilers for the next two weeks tease that things are about to heat up in Genoa City. During the week of May 27-31, Adam Newman (Mark Grossman) will continue to cause family chaos. Since Nick Newman (Joshua Morrow) won’t agree to Adam’s demands, his determined brother will turn to Victor Newman (Eric Braeden).

Adam will want his family back and he’ll do whatever it takes to get them. In addition to trying to track down Chelsea Newman (Melissa Claire Egan) and Connor Newman (Connor Gadbois), Adam won’t rest until he has custody of his youngest son. He’ll think Victor can help him get Christian Newman (Jude and Ozzy McGuigen). Adam will basically promise to be Victor’s loyal little soldier if his dad pulls it off.

However, Adam will also seek Sharon Newman’s (Sharon Case) assistance. He might think she can talk some sense into Nick and make him see that the boy should be with his father. Sharon obviously cares for Nick and Christian. She may contend that Nick IS Christian’s father – at least the only one he’s ever known. It’s tough to believe Sharon will be very supportive of Adam’s mission.

Nevertheless, Sharon won’t be able to fight the connection she feels with Adam. The Young and the Restless spoilers say a hot “Shadam” sex session is looming, but will it be real? It’s possible Sharon or even Adam will simply dream of a steamy reunion. Regardless, those are sure to be some intense scenes!

Y&R fans can also expect the reading of Neil Winters’ (Kristoff St. John) will and what seems to be a secret health crisis for Victor. Ashley Abbott (Eileen Davidson) will be on hand for Dina Mergeron’s (Marla Adams) transition to a special facility as well.

Back with Adam, he’ll decide to start a search. The Young and the Restless spoilers say Adam will try to track down Chloe Mitchell (Elizabeth Hendrickson). He told his secret partner that he knew who his shooter was, but he wanted to handle the matter himself. Is this Adam handling it? That could be the case. Regardless, Adam will want to find Chloe and apparently confront her for everything she’s done.

Over with Devon Hamilton (Bryton James), he’ll struggle to let go of Hilary Hamilton (Mishael Morgan). Devon’s dreams about Hilary will haunt him enough to hinder his new romance with Elena Dawson (Brytni Sarpy). Meanwhile, Nick will want Rey Rosales’ (Jordi Vilasuso) help. We know an Adam investigation will happen, so Nick may be the one pulling the strings.

During the week of June 3-7, Rey will develop serious suspicions about Adam. He’ll feel like there’s way more going on with this guy than anybody knows. While Rey digs deeper into Adam’s life outside GC, Kyle Abbott (Michael Mealor) will do something brave. Since wedding bells appear to be coming down the road, this may involve a proposal to Lola Rosales (Sasha Calle).

Next, Mariah Copeland (Camryn Grimes) will tackle a challenge. She offered criticism to Ana Hamilton (Loren Lott) when it wasn’t her job, but what if it was her job? Mariah actually had some great suggestions – like making Tessa Porter (Cait Fairbanks) one of the artists in a Jabot Collective promotion. Devon joked about Mariah being Tessa’s manager, but maybe that should be a reality.

Of course, Tessa stood up for herself against Ana’s ridiculous ideas and told her to burn the contract, but it seems Ana will back down – at least somewhat. It sounds like compromises are coming since Tessa and Ana will still end up working together in June.

Moving past the tension won’t be easy though. Mariah’s insecurities were on display in the beginning, but now it’s Ana’s turn. She’s got something to prove and is digging her heels in when she doesn’t know what she’s doing.

Finally, Victor will get stuck in major family drama. It looks like the Adam mayhem will reach a boiling point, so The Young the Restless fans can expect some shockers. We’ll give you updates as other Y&R news comes in. Stay tuned to the CBS soap and don’t forget to check CDL often for the latest Young and the Restless spoilers, rumors, updates, and news.