The Young and the Restless Spoilers Next 2 Weeks: Jack Drops Cousin Theo Bomb On Kyle – Chloe and Kevin’s Undercover Mission 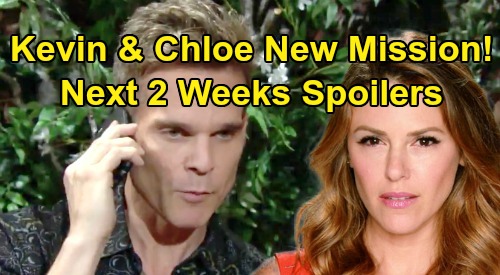 The Young and the Restless (Y&R) spoilers for the next two weeks tease that we’ll see some new challenges. During the week of October 28-November 1, Amanda Sinclair (Mishael Morgan) will hear a pitch from someone in need. She was all set to put Genoa City in the rearview mirror, but Nate Hastings (Sean Dominic) will change her mind.

Nate agreed to help Victor Newman (Eric Braeden) fake his death because he believed his patient’s life as at stake. It’s something he’s wrestled with ever since, but he felt it was the right call at the time. Unfortunately, Nate will land in some trouble thanks to that decision. His job may be in jeopardy, so Amanda could be just the person to bail him out of his jam.

While Amanda signs on for a new case, Nick Newman (Joshua Morrow) will tackle a run for city council. He’ll finally cave in and give this a shot, but he could regret it thanks to all the dirt that’ll be dug up. Chelsea Newman (Melissa Claire Egan) could put Nick’s campaign at risk soon enough. The mysterious Simon Black (Jeffrey Vincent Parise) will ultimately arrive to settle some unfinished business in town.

It won’t be long until Chelsea crosses paths with Simon and realizes trouble’s found her. Speaking of trouble, there’ll be plenty of that going on at Jabot. Jack Abbott (Peter Bergman) will quarrel with Kyle Abbott (Michael Mealor) and could potentially hand all the power over to Billy Abbott (Jason Thompson).

The Young and the Restless spoilers say spoilers say Billy will take on a new identity, but we doubt it’ll be a gum-chewing alternate personality this time. Sole CEO would be better fit here. Y&R fans can also expect some eerie dreams for Halloween. Nick, Kyle, Abby Newman (Melissa Ordway), Phyllis Summers (Michelle Stafford) and Rey Rosales (Jordi Vilasuso) will all have shocking nightmares in this standalone episode.

During the week of November 4-8, Chelsea will get some assistance. The Young and the Restless spoilers say Kevin Fisher (Greg Rikaart) and Chloe Mitchell (Elizabeth Hendrickson) will begin an undercover mission. They’ll probably try to get closer to Simon and figure out a way to get the upper hand. Chloe and Kevin will do their part to make sure Chelsea wiggles out this mess.

Sadly, that mess will only get messier! There’s a good chance Kevin and Chloe will botch their plan, so Chelsea’s problems should become far worse. Adam Newman (Mark Grossman) will get caught up in all this sooner or later, which will bring another ally for Chelsea.

Meanwhile, Phyllis will put together some clues and realize she’s in a powerful position. Both Chelsea and Abby will deal with some unpleasant surprises, so Phyllis will prove she’s the ultimate schemer. Mariah Copeland (Camryn Grimes), on the other hand, will have a sweet surprise in store for Tessa Porter (Cait Fairbanks). November sweeps info reveals they’ll be celebrating their anniversary soon, so that may tie in with Mariah’s surprise. Of course, the timing is a bit of a head-scratcher.

“Teriah” had their first date in July of last year with the understanding they’d be exclusive, so that was their anniversary if you want to get technical about it. After Tessa returned from smuggling Crystal Porter (Morgan Obenreder) into Canada, they reestablished that they both wanted this in September 2018. Y&R’s also chosen to bypass milestones like the anniversary of their first kiss and each one’s first “I love you,” so…what’s left?

Mariah and Tessa decided to live together last November, so maybe the writers are fudging a little and calling it their anniversary. They were in a committed relationship way before that, but hey – better late than never! It’s nice that the show’s at least acknowledging how long “Teriah” has lasted and giving them a romantic celebration.

Other Young and the Restless spoilers say Jack will drop a bomb, so this may have something to do with Dina Mergeron’s (Marla Adams) secret son, Eric Vanderway (Jon Briddell). Will Jack let Kyle know Theo Vanderway (Tyler Johnson) is his cousin? That seems to be how this storyline’s set to play out, so Kyle’s bound to get updates eventually.

It sounds like some exciting episodes are coming up. We’ll keep you posted as other Y&R news emerges. Stay tuned to the CBS soap and don’t forget check CDL often for the latest Young and the Restless spoilers, updates and news.