BY Heather Hughes on May 18, 2019 | Comments: one comment
Related : Soap Opera, Spoiler, Television, The Young and the Restless 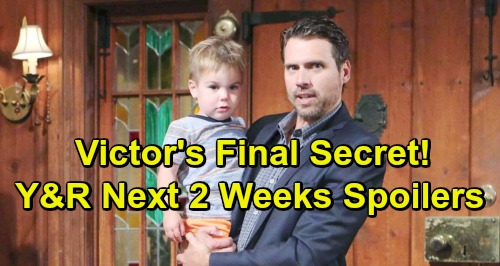 The Young and the Restless (Y&R) spoilers for the next two weeks tease that some Genoa City shockers are ahead. During the week of May 20-24, Adam Newman (Mark Grossman) will be armed with his old memories. That’ll fuel some family conflict, especially since Victor Newman (Eric Braeden) will be so delighted.

After Adam survives emergency surgery and awakens in the hospital, it’ll all come back to him. The memory flood will leave the rest of the Newman family feeling threatened. They’ll work to protect themselves from any gambles Adam might take or damage he might go.

Other Y&R spoilers say Arturo Rosales (Jason Canela) and Mia Rosales (Noemi Gonzalez) will leave GC behind. They’ll move to Miami and try to approach parenthood with maturity. Lola Rosales (Sasha Calle) will be upset about her brother’s departure, but Kyle Abbott (Michael Mealor) will be there to support her. Unfortunately, they’ll have a kitchen mishap that leaves them both reeling later.

Lola is an excellent chef, but everybody can make a mistake or two. The Young and the Restless spoilers say smoke will billow thanks to Lola’s burned concoction. Kyle will help Lola deal with the drama while Devon Hamilton (Bryton James) bonds with Elena Dawson (Brytni Sarpy). They’ll keep moving their romance forward, so it should be nice to watch love bloom for Devon.

Over with Dr. Nate Hastings (Sean Dominic), he’ll keep his promise. Nate made it clear to Abby Newman (Melissa Ordway) that he wasn’t giving up. He’ll decide to be bolder in his attempts to win Abby over. Look for Nate’s next move to truly get Abby’s attention!

Next, Adam will reunite with Jack Abbott (Peter Bergman). They’ll spend some time reconnecting while Billy Abbott (Jason Thompson) remains on edge. He’ll get into an argument with Victor, so this will probably center around Victoria and the risk Adam poses to her. Billy won’t want Adam making things difficult for Victoria at Newman or in any other aspect of her life.

However, Victoria will already be watching out for herself. She’ll join forces with Nick, so alliances are already forming within the Newman clan. It’s safe to say Victor isn’t going to like this. During the week of May 27-31, Adam will dive deeper into his history. He’ll already have his memories back, so this may mean resolving some unfinished business.

Will Adam try to locate Chelsea Newman (Melissa Claire Egan)? Nick has her number, so he’d be wise to pass it along. If Adam had Connor Newman (Gunner and Ryder Gadbois), perhaps he’d be less inclined to go after Christian Newman (Jude and Ozzy McGuigen). It’d a least be worth a shot, but Nick may be wary of unleashing more chaos.

The Young and the Restless spoilers say Victoria will make a deal later. Will she stick to her Nick alliance or decide to fight for herself? Victoria could reach an agreement with Victor if she feels it’ll be in her best interest. As for Victor, he’ll have one more secret. Will it involve something he’s keeping for Adam? Could it be something that’ll ultimately turn Adam against Victor instead?

Finally, Cane Ashby (Daniel Goddard) will make a difficult choice. This may involve Lily Ashby (Christel Khalil) or some of the way she’s trying to better himself. Regardless, Traci Abbott (Beth Maitland) should stick to Cane like glue now that she’s realized her crush!

It sounds like the next two weeks will be packed with action. We’ll give you updates as other Y&R news comes in. Stay tuned to the CBS soap and don’t forget to check CDL often for the latest Young and the Restless spoilers, updates, and news.