The Young and the Restless Spoilers Next 2 Weeks: Neil’s Death Stuns GC – Jack and Victor Reconcile For Funeral 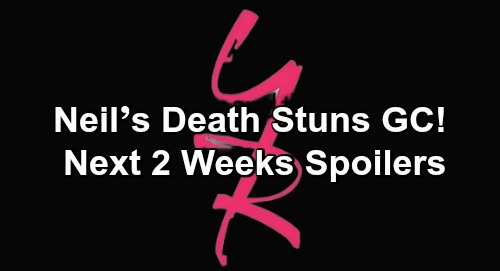 The Young and the Restless (Y&R) spoilers for the next two weeks tease that some tricky situations are coming up. During the week of April 15-19, Kyle Abbott (Michael Mealor) will find himself torn between Summer Abbott (Hunter King) and Lola Rosales (Sasha Calle). When Jack Abbott (Peter Bergman) realizes his son still hasn’t made a firm choice, he’ll warn Kyle about the pain he’ll cause.

Kyle will meet up with Lola later and admit he hasn’t dumped Summer yet, but he’ll vow to do it soon. Of course, Summer won’t give up this marriage without a fight. She’ll get jealous and make it crystal clear that she’ll do whatever it takes to keep her man. Kyle will definitely face some difficult moments in the week ahead.

Other Y&R spoilers say Cane Ashby (Daniel Goddard) will plan a surprise for Lily Ashby (Christel Khalil). He’ll have a spa day all prepared for Lily when she gets out of prison, but Lily won’t care about being pampered. That’s not going to fix what’s broken between them or help Lily move past what she’s been through.

Lily will want to attend Abby Newman’s (Melissa Ordway) restaurant opening and leave town soon after, but Cane will hope for one more chance. He’ll convince Lily to let him accompany her to the opening, even if it’s just to avoid stealing Abby’s spotlight. Lily going by herself would be a red flag, so she’ll let Cane come along. Unfortunately, it doesn’t look like Cane will be able to win Lily over.

Meanwhile, Abby will have to contain a crisis. Her restaurant opening will come with some drama, so she’ll do what she can to save her reputation and the future of this business. Devon Hamilton (Bryton James) will also turn on the charm with Elena Dawson (Brytni Sarpy) as they go on their first date. Sadly, some devastating news is rapidly approaching.

During the week of April 22-26, Neil Winters (Kristoff St. John) will pass away. Devon will face this terrible blow along with the rest of Neil’s family and friends. The Young and the Restless spoilers say nearly all of Genoa City will grieve over this great loss. Malcolm Winters (Shemar Moore) will receive word and head back to town, so look for him to reflect on old memories with Devon and Lily.

Jack and Victor Newman (Eric Braeden) will end up coming together during this time of crisis. They’re enemies on any given day, but they’ll just be mourners on this somber occasion. Nikki Newman (Melody Thomas Scott) will also deal with plenty of grief as Neil’s funeral gets underway.

Later, Cane will once again beg Lily to forgive him. He’ll hope Neil’s death will help her see how important it is to seize life and appreciate your loved ones while you still can. However, Lily may stand her ground on moving on. She seems determined to get a fresh start elsewhere, so the pain of all this could solidify that decision.