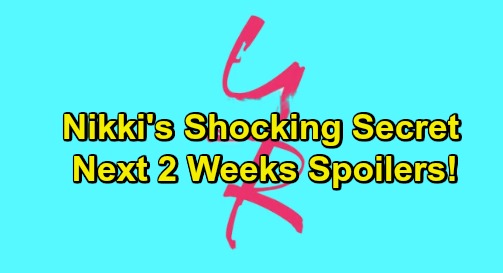 The Young and the Restless (Y&R) spoilers for the next two weeks tease that some shockers are ahead in Genoa City. During the week of April 8-12, Mia Rosales (Noemi Gonzalez) will learn her scheme isn’t a scheme after all. She faked the pregnancy test and the ultrasound photo, but a confrontation with Sharon Newman (Sharon Case) will lead to cramps and proof that this is the real deal.

Mia may suspect that Arturo Rosales (Jason Canela) is the “baby daddy,” but she’ll hate the idea of watching Rey Rosales (Jordi Vilasuso) move on with Sharon. She’ll keep stringing Rey along for as long as possible and causing drama for Sharon along the way. Next, Lauren Baldwin (Tracey E. Bregman) will take steps to protect herself. She’ll fight for Fenmore’s future no matter the cost!

Y&R spoilers say Jack Abbott (Peter Bergman) will deal with a tough setback soon enough. He’ll find a bug Ashley Abbott (Eileen Davidson) planted in the gift basket she sent over. Ash will swipe Jabot’s apparel and lifestyle strategy for My Beauty. It looks like her launch will be ahead of Jabot’s, so Jack will be at a disadvantage once again.

Other Young and the Restless spoilers say Kyle Abbott (Michael Mealor) will tackle temptation. Lola Rosales (Sasha Calle) will lure him to a room for sex, and it appears they’ll actually go through with it. Too bad Phyllis Summers (Gina Tognoni) will discover the betrayal! There’s a good chance she’ll hold this over Kyle, but Y&R fans can expect consequences thanks to this risky plan.

Over with Victoria Newman (Amelia Heinle), she’ll work with Billy on a project in Las Vegas. Victor Newman (Eric Braeden) has been having some mysterious meetings as high-stakes poker games. As Victoria’s curiosity grows, she’ll dive deep into all this and try to figure out what her father’s up to.

During the week of April 15-19, Nikki Newman (Melody Thomas Scott) will uncover something surprising. She’ll find out somebody’s secret and it’s probably her husband’s. Victoria may tip Nikki off to what Victor’s doing. Does this involve a search for Adam Newman (Mark Grossman)? Y&R will need some way to bring the recast into the picture, so they might as well start setting it up now.

Next, Paul Williams (Doug Davidson) will battle some suspicions. He’ll want to trust Rey after reinstating him at the GCPD. However, Paul won’t be certain that Rey’s being honest with him. This could be about Mia’s attack on Lola and the cover-up it resulted in. Paul might think Rey knows more than he’s letting on.

Other Young and the Restless spoilers say Jack will have a meltdown. Between Ashley and Phyllis, he’ll probably just reach his breaking point. Jack will need a chance to vent, but he won’t give up. Jabot is important to him, so Jack won’t let anyone rob him of his family’s legacy.

Finally, Abby Newman (Melissa Ordway) will prepare for her new restaurant’s opening night. Lola will hopefully be ready to hit the kitchen and whip up some great dishes. Tessa Porter (Cait Fairbanks) is getting back into music, but she’ll need a job in the meantime. She should wait tables as planned, so Abby’s goals will be right on track.

Of course, snags seem inevitable at some point. There’ll have to be something that trips Abby up, but she’ll be determined to be GC’s latest success story. We’ll give you updates as other Y&R news comes in. Stay tuned to the CBS soap and don’t forget to check CDL often for the latest Young and the Restless spoilers, updates, and news.