The Young and the Restless Spoilers Next 2 Weeks: Phillip Gets A Proposal – Billy’s Old Habits Return – Adam’s Connor Crisis 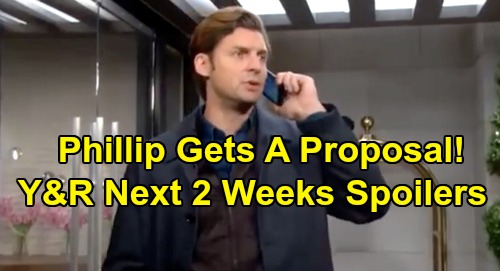 The Young and the Restless (Y&R) spoilers for the next two weeks tease that things are about to heat up in Genoa City. For starters, we’ll see more Amanda Sinclair (Mishael Morgan) bashing. Nate Hastings (Sean Dominic) will get flak for hanging out with Amanda, but he’ll refuse to throw away their growing bond.

Despite Devon Hamilton (Bryton James) and Elena Dawson’s (Brytni Sarpy) complaints, Nate will defend Amanda and insist he doesn’t see Hilary Hamilton (Mishael Morgan) when he looks at her. However, Amanda will still find herself feeling lost and pensive. So will Billy Abbott (Jason Thompson), who’ll wind up at the same dive bar as Amanda.

Billy will intervene when a drunk guy makes his move, which will leave Amanda grateful for the assist. After Billy turns down Amanda’s offer to buy him a drink, they’ll still end up forming a connection later. That dive bar will become a place of refuge during the upcoming storm and blackout. That’ll give Billy and Amanda plenty of time to get to know each other a bit better.

At Newman Enterprises, Rey Rosales (Jordi Vilasuso) will be with Victoria Newman (Amelia Heinle) when the power cuts off. Like Billy and Amanda, Victoria and Rey will have an opportunity to connect. As for Nick Newman (Joshua Morrow), he’ll fume over Adam Newman (Mark Grossman) reeling Chelsea Lawson (Melissa Claire Egan). Nick will be convinced that Chelsea’s decision to move in with Adam is a mistake.

Chelsea will insist on putting Connor Newman (Judah Mackey) first, but Nick will fear Adam’s going to cross the line and manipulate Chelsea into doing what he wants. However, Adam will be focused on Connor for now. He’ll be tortured over his influence on the kid and worry that he’s still contributing to Connor’s problems.

Back with Devon, his relationship with Elena will be put to the test. Things will be more strained than ever, which will set up what comes next. Y&R spoilers say Devon will struggle to get Amanda off his mind. Of course, that may be more about her face and less about Amanda herself. Having Amanda around constantly could be bringing back all that complicated grief and anger over Hilary’s death.

Next, Phyllis Summers (Michelle Stafford) will continue bonding with Nick before clashing with Abby Newman (Melissa Ordway). As the robbery mystery carries on, it’ll be yet another reason for Abby and Phyllis to spar. Phillip “Chance” Chancellor IV (Donny Boaz) will hear an interesting proposal later, and it’ll make sure his stay in Genoa City becomes permanent.

Meanwhile, Summer Newman (Hunter King) will look within and try to figure out what her future with Theo Vanderway (Tyler Johnson) looks like – if they even have a future at all. It’s time to decide if they’re committed to being together or not.

Mariah Copeland (Camryn Grimes) will deliver a warning to Summer eventually. She may remind Summer that no matter what her choice is, Kyle Abbott (Michael Mealor) should remain off-limits. Mariah will certainly want to keep Summer out of Kyle and Lola Abbott’s (Sasha Calle) marriage.

During the week of December 9-13, Adam will do some button-pushing. He may needle Phyllis about the nature of her relationship to Nick. As for Billy, old habits will be tough to break. Does that mean his gum-chewing alter will be back? Could it refer to cheating instead?

Whatever the case, Billy’s link to Amanda could prove risky. The Young and the Restless spoilers say Victor Newman (Eric Braeden) will grow increasingly suspicious of Amanda, so Billy really doesn’t need to be anywhere near this. Victor already warned he wouldn’t be so forgiving if Billy messed up again!

Finally, The Young and the Restless spoilers say Kyle will pat himself on the back. He’ll toast to his own success, so what dos that mean? It’s possible Kyle will sabotage Theo at Jabot and succeed in pushing him out.

If that’s the case, Kyle’s victory could turn into a defeat once the truth is exposed. We’ll give you updates as other Y&R news comes in. Stay tuned to the CBS soap and don’t forget to check CDL often for the latest Young and the Restless spoilers, updates and news.