The Young and the Restless Spoilers Next 2 Weeks: Rey and Sharon Fall for Trap – Chelsea’s Nasty Surprise – Theo’s Wedding Destruction

BY Heather Hughes on August 4, 2019 | Comments: one comment
Related : Soap Opera, Spoiler, Television, The Young and the Restless 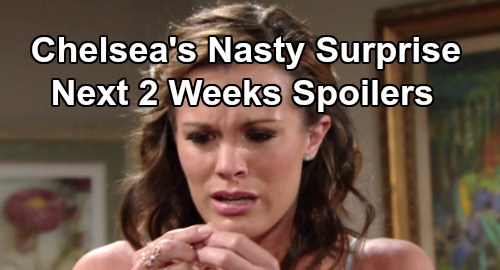 The Young and the Restless (Y&R) spoilers for the next two weeks tease that more conflict’s brewing in Genoa City. During the week of August 5-9, Sharon Newman (Sharon Case) will interrupt a fierce fight. She’ll get in the middle of Nick Newman’s (Joshua Morrow) latest round of tension with Adam Newman (Mark Grossman), so she’ll have to pick a side.

Despite Adam dropping the paternity bomb on Christian Newman, Sharon will think Nick’s the one doing the provoking. She’ll feel like Nick needs to give Adam a chance to prove himself, but Nick won’t be interested. Sharon will comfort a vulnerable Adam back at his place before they get hot and heavy in the bedroom.

Other Young and the Restless spoilers say Mariah Copeland (Camryn Grimes) will do some matchmaking. She’ll think Sharon still has a chance to patch things up with Rey Rosales (Jordi Vilasuso), so she’ll make sure they’re both at an upcoming party. Lola Rosales (Sasha Calle) and Kyle Abbott (Michael Mealor) will be having a joint bachelorette-bachelor bash, but Rey and Sharon won’t be happy to see each other.

As for Mariah, the fact that she’s even planning this party will irk Abby Newman (Melissa Ordway). Princess Abby will think she’s the one who should be stepping up for Lola. She’ll think Mariah’s butting in on her duties as maid of honor. Of course, Mariah might point out that Abby’s a busy woman. She was just trying to do a nice thing here. If Abby wanted to plan this, she should’ve taken charge sooner.

Abby will continue being a drama queen by facing off with the equally dramatic Summer Newman (Hunter King). They’ll trade barbs regarding their love lives before getting into a catfight, which will include thrown water and a dumped ice bucket. Mariah will get stuck in the middle of it and perhaps wish she’d let Abby handle this mess after all!

Other Young and the Restless spoilers say Nikki Newman (Melody Thomas Scott) will get tough. She won’t take no for an answer, so this might involve Victor Newman’s (Eric Braeden) health. If he has another difficult episode, Nikki might force him to get checked out at the hospital. Victor’s public persona matters to him, but it can’t come at the expense of his life.

Over with Billy Abbott (Jason Thompson), his Delia Abbott (Sophie Pollono) nightmares will continue. Billy will be on the verge of a breakdown as he begs Delia to tell him what to do. Y&R spoilers say Jack Abbott (Peter Bergman) will take control of a situation this week. Since Billy will be ignoring his therapist’s advice, will Jack push for a more extensive form of treatment?

The Young and the Restless spoilers say Billy will leave town for a bit soon. He may need more than just a few therapy sessions to deal with his issues. During the week of August 12-16, Elena Dawson (Brytni Sarpy) will head down a new path. Perhaps it’ll be time for a career change since she’s struggling to deal with this EMT job.

Next, a shocker will head Chelsea Newman’s (Melissa Claire Egan) way. There’s no word on what it might be just yet, but it seems Daryl Tulane (Gordon Thomson) may have at least one more surprise in store. Elsewhere, Victor will take the reins. He may feel the need to intervene if Adam and Nick’s war gets worse.

Finally, The Young and the Restless spoilers say it’ll be Kyle and Lola’s wedding day. Despite some bachelorette-bachelor party trouble, “Kola” will survive the night and prepare to head to the altar. Will they actually tie the knot? Will Theo Vanderway’s (Tyler Johnson) New York truth derail their nuptials instead?

Regardless, Y&R fans can expect some serious excitement over the next couple weeks. We’ll give you updates as other news comes in. Stay tuned to the CBS soap and don’t forget to check CDL often for the latest Young and the Restless spoilers, updates and news.