BY Heather Hughes on July 2, 2019 | Comments: one comment
Related : Soap Opera, Spoiler, Television, The Young and the Restless 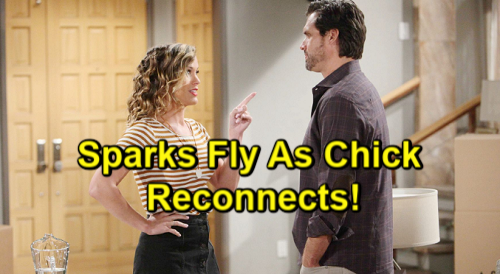 The Young and the Restless (Y&R) spoilers tease that Chelsea Newman (Melissa Claire Egan) will continue to reconnect with Nick Newman (Joshua Morrow). On July 2, Chelsea delivers an apology to Nick for what went down in the past. She hates that she hurt him, but Nick isn’t holding a grudge. He still cares about Chelsea and always will.

During the week of July 8-12, The Young and the Restless spoilers say Nick and Chelsea’s bond will deepen. They’ll end up sharing an electric moment, which sounds dangerous for several reasons. For starters, there’s a custody battle going on. The last thing Nick needs to be doing is finding new ways to rile Adam Newman (Mark Grossman) up.

If Adam witnesses Chelsea and Nick’s moment or at least realizes they’re growing closer, he’ll be furious. Adam could easily use it as motivation in the custody fight.

It could add fuel to the flames of this already out-of-control war. Adam might rev up the pressure on Kevin Fisher (Greg Rikaart) and make sure he comes up with a shocker Nick doesn’t stand a chance against in court.

Of course, we could also finally see that fist fight Chelsea interrupted. Nick and Adam were just about to come to blows when Chelsea barged in Dark Horse. She sent them to their corners, but it’d actually be fun to watch these brothers throw some punches. It could easily happen if Adam catches Nick cozying up to Chelsea. If he spots a kiss, that’d really leave Adam enraged.

However, there’s another reason this is dangerous – at least for Nick. He’s had his heart broken a lot in his last few relationships. Nick betrayed Sharon Newman (Sharon Case) with Phyllis Summers (Michelle Stafford), which destroyed Shick’s happily ever after. Despite Nick’s best efforts to patch things up romantically, Sharon just wasn’t having it.

Phyllis hurt Nick’s family and continues to cause problems, so he was once again left unlucky in love. Going back to all the Chelsea chaos, that broken engagement left Nick crushed, too. Nick seems poised to face heartbreak once more if he falls for Chelsea. Y&R fans know Adam and Chelsea can never stay away from each other for too long.