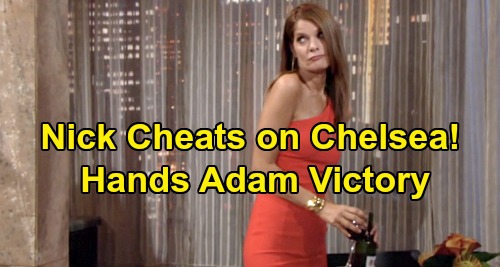 The Young and the Restless (Y&R) spoilers tease that Chelsea Lawson (Melissa Claire Egan) will could push Nick Newman (Joshua Morrow) too far. Of course, we can’t put “Chick’s” relationship issues entirely on Chelsea. Nick lied about Victor Newman’s (Eric Braeden) fake death plot, and that’s certainly something Chelsea should’ve been brought in the loop on. She might’ve found a way to shield Connor Newman (Judah Mackey) if she’d known the truth.

Instead, that became one more blow for the boy to face. Chelsea was hurt by Nick’s deception, but her lies haven’t exactly been easy for Nick either. She covered up her money laundering scheme until it all blew up with Simon Black’s (Jeffrey Vincent Parise) hostage situation. There are trust issues for Nick and Chelsea, which is never a good sign on a soap. It often means trust is about to be shattered beyond repair.

Of course, we’ve also got Chelsea drifting toward Adam Newman (Mark Grossman) and appreciating his help with Connor. She recently reminded Nick that Adam would always be Connor’s father. The kid clearly wants his parents back together, and he’ll likely get his wish – just perhaps not in the way everyone expects.

The logical path here is for Chelsea to keep drifting toward Adam and ultimately fall into bed with him. However, what if it’s Nick who cheats instead? It’s certainly a possibility to consider based on some recent scenes with Phyllis Summers (Michelle Stafford) and more scenes to come. It seems likely Phyllis will be paired with Phillip “Chance” Chancellor IV (Donny Boaz) sooner or later, but she may have some fun with an ex first.

Since Chelsea’s already got so many lies working against her, the writers may want to make Nick the bad guy here. They’ve also been trying to redeem Adam a bit – or at least put him on a less destructive path. Nick may have to be the one who truly ruins things with Chelsea.

The Young and the Restless spoilers say Nick and Phyllis will do some reminiscing during the week of December 2-6. Could we be building toward a hookup as the holidays approach? They could find themselves with a steamy secret that could blow down the road. It’d be familiar territory for Nick and Phyllis, who did the same thing before Nick’s wedding to Sharon Newman (Sharon Case).

Will Nick cheat and send a distraught Chelsea straight into Adam’s arms? As we see more distance for “Chick” and a closer connection for “Phick,” we wouldn’t be surprised! The Young and the Restless spoilers say some great drama’s brewing no matter what. We’ll give you updates as other Y&R news comes in. Stay tuned to the CBS soap and don’t forget to check CDL often for the latest Young and the Restless spoilers, updates and news.