The Young and the Restless Spoilers: Nick Sets Himself Up for Chelsea Heartbreak – Chadam Reunion Hits Hard 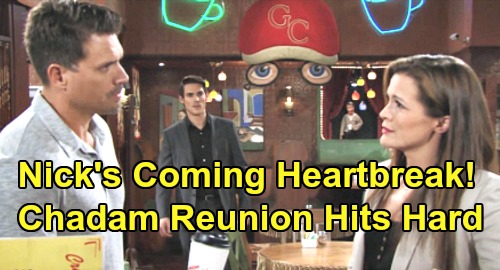 The Young and the Restless (Y&R) spoilers tease that Nick Newman (Joshua Morrow) may be setting himself up for more heartbreak. Summer Newman (Hunter King) is certainly worried about Nick and Chelsea Newman’s (Melissa Claire Egan) renewed bond. Nick has a hard time being on his own. He’s not cut out for the single life, so he tends to fall fast and hard whenever an ex needs him.

That’s clearly been the case with Chelsea since she came back to town. Nick has been pretty quick to forgive and forget his former flame’s mistakes. He just wants to help Chelsea and protect her from big, bad wolf Adam Newman (Mark Grossman).

It really isn’t so wrong for Adam to want to be in Connor Newman’s (Gunner and Ryder Gadbois) life. It’s not unreasonable for Adam to make a pitch for a reunion with Chelsea either.

Nick Newman Can’t See That Chadam Is Meant To Be

He adored her and she adored him right back. Adam undoubtedly came on too strong, but he’s a man in love. He can see what Chelsea’s lost sight of, which is that they’re meant to be together.

Unfortunately, Nick can’t see it either and that’s probably going to bring heartache. The Young and the Restless spoilers say Chelsea and Nick are poised for a reunion, but will it last? It’s doubtful now that Adam and Chelsea are back in each other’s orbit.

Chelsea is overwhelmed by her emotions at the moment. Between dealing with Adam’s pressure and Calvin Boudreau’s (John Burke) death, Chelsea can barely keep herself together. Murder suspicions will be piled on, thanks to a recording that Adam hands over. Chelsea will look like she had a strong motive to get rid of Calvin due to the taped argument.

Chelsea Newman Simply Didn’t Know Who Else To Call

However, there’s a good chance “Chadam” will come back around eventually. Adam’s always been the kind of guy that Chelsea just couldn’t stay away from. Once Chelsea processes her feelings, she’ll be able to leave the safety net she’s found with Nick. It seems obvious Nick is just there and comfortable.

As Chelsea pointed out after Calvin’s death, she simply didn’t know who else to call. Chelsea couldn’t trust Adam enough to summon him, so loyal Nick was by her side in a flash. Nick is easy and Adam is complicated – and we all know which relationships soaps tend to go for. Complex love stories are the ones that truly draw Y&R fans in.

Nick will likely get dropped like a hot potato at some point, and it might serve him right for jumping back in with Chelsea so quickly. Maybe Nick will learn a valuable lesson about protecting his own feelings, but we doubt it! Instead, Nick may find himself drawn to a different ex – like problematic Phyllis Summers (Michelle Stafford).