The Young and the Restless Spoilers: Nick Vows To Hunt Down Person Setting Up Victor – Phyllis Framed The Moustache?

BY hellodrdavis on January 7, 2019 | Comments: 2 comments
Related : Soap Opera, Spoiler, Television, The Young and the Restless 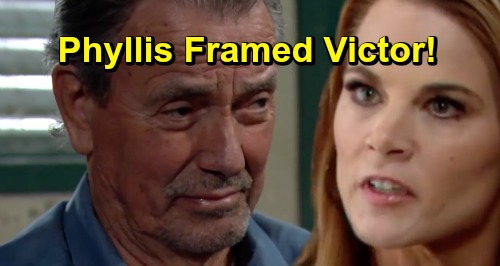 The Young and the Restless spoilers tease that Nick Newman (Joshua Morrow) will soon do something he vowed never to do – he’ll set aside his differences with Victor Newman (Eric Braeden) and team with him to find out who is setting Victor up for JT Hellstrom’s (Thad Luckinbill) murder. Nick is no big fan of his dad’s, but he can easily see that his dad is being set up for a murder he didn’t commit.

The clothes with JT’s blood on them and the gun that were found at the Newman stables were just too convenient a find for the police. Nick truly believes that someone planted that evidence.

He doesn’t like it that his dad took off and was missing in action for so long to evade the police, but Nick can understand why his dad would do it. In fact, he might have done the same thing if put in the same position.

So Nick and Victor will work together to find the person responsible for framing Victor. And since Victor is currently behind bars with no bail set, the brunt of the detective work will have to be done by Nick and his minions. He’ll set off on a path that may lead him directly to a person that he knows and trusts…Phyllis Summers (Gina Tognoni).

It’s quite possible that Phyllis is the person who has been setting up Victor for JT’s murder. Phyllis is definitely the most calculating of all of the cover-up crew members, and she hasn’t been shy about suggesting that the crew implicate someone else to keep the spotlight off of them.

Not only does Phyllis hate The Moustache but she’s also the most likely crew member to branch out on her own and take matters into her own hands.

Of course, if that’s true, then it means that Phyllis is probably responsible for moving JT’s body from Chancellor Park. Whoever set Victor up for the murder had access to JT’s blood, which means they had to have had access to his body. That means that she would have gone rogue from the cover-up crew early on. But wouldn’t that be just like Phyllis?

But one thing that Phyllis probably wasn’t counting on in her grand scheme was for Nick to eventually team up with Victor to go after the person setting Victor up. Phyllis probably figured that Nick would stay out of it and let the police do their job. It will put Phyllis in a scary position knowing that Nick is on her trail.

If Phyllis is the one who is setting Victor up, then she was probably careful in covering her tracks, but Nick’s got a lot of resources and manpower at his disposal. He might be able to track her down with relative ease once he gets started, so Phyllis had better watch out.

Do you think Phyllis is the one who set up Victor for JT’s murder? Stay tuned to the CBS soap and don’t forget to check CDL often for the latest Young and the Restless spoilers, updates, and news.