The Young and the Restless Spoilers: Nikki, Victoria and Sharon Escape from Prison Transport Van – Billy and Nick’s Hijack Plot 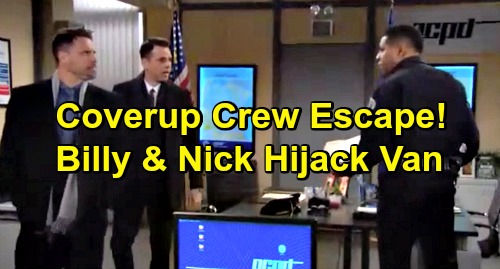 The Young and the Restless (Y&R) spoilers tease that Nick Newman (Joshua Morrow) and Billy Abbott (Jason Thompson) will do something drastic. They can’t bear the thought of the women they love being locked up, so they’ll take matters into their own hands. A shocking plot is on the way, but it’ll certainly be risky.

Sharon Newman (Sharon Case), Victoria Newman (Amelia Heinle) and Nikki Newman (Melody Thomas Scott) will all load into a prison transport van. The Young and the Restless spoilers say they’ll be stunned when Billy and Nick hijack it, so things are about to get crazy. Y&R fans can expect several major twists as this storyline heats up.

There’s a chance Rey Rosales (Jordi Vilasuso) will be in on at least part of the plan. The guys go to Rey with a matter of life and death on Thursday, so he could prove helpful. Rey is in love with Sharon and undoubtedly feels guilty about how everything went down. This could be his shot at proving he wasn’t just manipulating her.

However, Nick and Billy will definitely be taking the lead on this. They’ll move forward no matter what, so the ladies will be both fearful and appreciative. Nikki, Victoria and Sharon may worry about adding more years to their sentences. They’ll be fugitives, but that won’t exactly be their choice. Billy and Nick may vow to take the blame if something goes wrong, so that might ease the women’s minds.

The Young and the Restless spoilers say the girls’ night gang will end up at the Abbott cabin on next week’s new Y&R episodes, March 18-22. Nick and Billy will want them to hide there while they continue their J.T. Hellstrom (Thad Luckinbill) hunt. They’ll feel confident this scheme will keep the ladies safe, but Y&R viewers know how plans tend to go awry!

Billy and Nick will soon lose control of their scheme, so you can bet Victor Newman (Eric Braeden) will be concerned. The Young and the Restless spoilers say he won’t be happy about being left out of the loop! Victor will eventually have an opportunity swoop in and come to the rescue, so stay tuned for that.

This is all building to a jaw-dropping J.T. showdown that fans won’t want to miss. We’ll give you updates as other Y&R news comes in. Stick with the CBS soap and don’t forget to check CDL often for the latest Young and the Restless spoilers, updates, and news.