The Young and the Restless Spoilers: Only Love Can Stop Phyllis’ Destruction – Which Y&R Hunk Is Her Ideal Match? 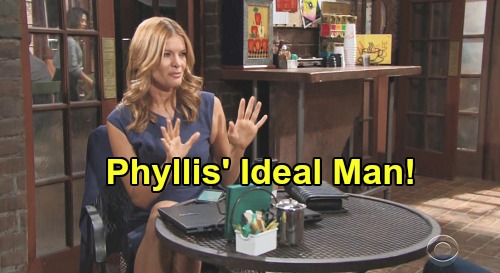 The Young and the Restless (Y&R) spoilers tease that Phyllis Summers (Michelle Stafford) will remain focused on stirring the pot. She’s hung up on revenge, so she could really use a distraction. Isn’t it about time for Phyllis to find love again? After things fell apart with Billy Abbott (Jason Thompson), Phyllis reunited with Nick Newman (Joshua Morrow). Unfortunately, that romance blew up thanks to Phyllis’ immunity deal in the J.T. Hellstrom (Thad Luckinbill) case.

However, all that happened with Gina Tognoni in the role. Now that Stafford’s been back for a while, she needs a love interest. Y&R viewers have adjusted to Stafford’s return, so they need to pair Phyllis up and let some sizzle happen. Love may be the only thing that can stop Phyllis’ destruction!

Of course, there are at least three options the show could go with. Phyllis has been drawn to Adam Newman (Mark Grossman) despite a few bumps along the way. They’ve stabbed each other in the back a time or two, but Phyllis respects Adam intellect and dark side. He’s been about the only person she’s truly been able to connect with lately.

The Young and the Restless hasn’t portrayed Phyllis and Adam as more than friends at this point. In fact, they’re really only friends from Phyllis’ perspective. Adam treats Phyllis like more of an annoyance than anything, but he appreciated her support when he thought Victor Newman (Eric Braeden) was dead. If there’s a thin line between love and hate, there may be an even thinner line between allies and lovers.

Nevertheless, there’s a good chance Adam and Sharon Newman’s (Sharon Case) romance was dropped to push him back toward Chelsea Newman (Melissa Claire Egan). With that in mind, maybe we should explore other possibilities for Phyllis. She shared some scenes with Cane Ashby (Daniel Goddard) recently, which brought some banter and a mischievous sort of chemistry.

Cane can be a scheme when he wants to be, and he needs a love interest as well. Lily Winters (Christel Khalil) isn’t coming back long-term, so “Lane” fans may have to accept someone new in Cane’s life. His potential relationship with Traci Abbott (Beth Maitland) was scrapped, but what about Phyllis? There definitely seemed to be some chem testing going on, so we’ll see how that goes.

Could Nick Newman And Phyllis Summers Fall In Love Again?

If Y&R opts to go in another direction, they may hold off for a bit and let Chelsea’s relationship with Nick Newman (Joshua Morrow) implode – and you can bet it will. The Young and the Restless spoilers say Chelsea’s money laundering scandal could be exposed, which may leave Nick furious. He tends to forget his own secrets in situations like that. With Nick’s political career on the horizon, Chelsea could make major trouble for him.

When you throw in Connor Newman’s (Judah Mackey) preference for Adam, it’s just a matter of time until Chelsea lands back in her ex’s arms. Could that put Nick in the arms of an ex, too? Classic “Phick” fans hope so. It’d be interesting to see Nick and Phyllis fall for each other again with Stafford back in the role.

Whatever the case, let’s hope Phyllis finds someone to keep her warm at night eventually! Love stories are the bread and butter of soaps, so Phyllis deserves one. We’ll give you updates as other Y&R news comes in. Stay tuned to the CBS soap and don’t forget to check CDL often for the latest Young and the Restless spoilers, updates and news.