The Young and the Restless Spoilers: Paul Thinks Rey’s Hiding Something – Figures Out Lola’s Attacker Was Mia

BY hellodrdavis on April 7, 2019 | Comments: one comment
Related : Soap Opera, Spoiler, Television, The Young and the Restless 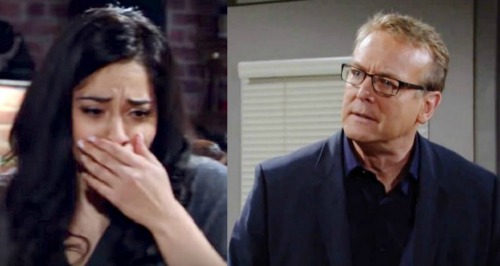 The Young and the Restless spoilers tease that Rey Rosales (Jordi Vilasuso) may soon be under a cloud of suspicion. Rey’s been dealing with a lot lately. He lost his job, and his sister Lola Rosales (Sasha Calle) underwent a liver transplant and was in bad shape for a while.

In addition, Rey’s marriage to Mia Rosales (Noemi Gonzalez) fell apart big time, and he started a new relationship with Sharon Newman (Sharon Case). It’s been a lot for him to handle.

But in the midst of all of Rey’s new life changes, he seems to have put something important on the back burner. Before he was fired, Rey solved Lola’s assault case. He figured out that Mia was Lola’s attacker, and that Mia thought she was attacking Abby Newman (Melissa Ordway).

But since Mia’s pregnant, Rey decided to officially keep the case “unsolved” and hide the fact that Mia was Lola’s attacker.

And even though Rey now knows that he might not be the father of Mia’s baby, he’s still keeping quiet about what Mia did. Mia did a good job of guilting Rey into not allowing the baby to be born in prison, and it seems that he’s still intent on keeping the secret for now.

But there’s one thing that Rey probably wasn’t counting on. He didn’t expect to get fired by Paul Williams (Doug Davidson). Now that Rey isn’t present at the GCPD to hide evidence or obfuscate facts, it’s entirely possible that someone else will solve the matter of Lola’s attack.

After all, it shouldn’t be too hard for someone on the case to realize that Lola was wearing Abby’s coat that night, and so the real target of the attack was Abby.

And from there, it should be fairly straightforward to figure out that Mia is the person who had the most motivation that night to attack Abby. Given Paul’s ire with Rey, he might decide to take a hard look at all of the cases that involved Rey, to see if Rey blundered any other cases besides the JT Hellstrom (Thad Luckinbill) case. It would be a very “Paul” move.

Y&R spoilers indicate that Paul just might go this route. He’ll soon find himself suspicious of Rey. Will he have the feeling that Rey is hiding something?

He might have a big problem with the fact that Rey got involved at all with Lola’s case, since Lola’s his immediate family, and from there suspect that Rey may know something more about the case than he’s been letting on.

It will be interesting to see what Paul’s suspicions will turn up. Of course, if Paul does solve Lola’s case, then there won’t be anything that Rey can do to prevent Mia from possible jail time, so there’s the very real possibility that Rey’s baby (if the baby is his) could be born in jail after all.

Do you think that Paul will figure out that Mia attacked Lola? Stay tuned to the CBS soap and don’t forget to check CDL often for the latest Young and the Restless spoilers, updates, and news.