BY Sean O'Brien on January 27, 2019 | Comments: one comment
Related : Soap Opera, Spoiler, Television, The Young and the Restless 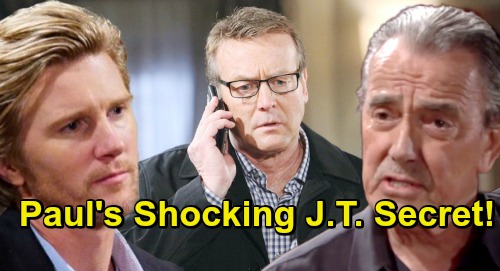 So whoever framed him for J.T. Hellstrom’s (Thad Luckinbill) death, has been tormenting Nikki (Melody Thomas Scott), and has the Ranch under surveillance has done so based on some type of revenge grudge. But who is this person?

In one of, if not the strangest exits in show history, Paul Williams (Doug Davidson) simply disappeared from GC last year.

Davidson later advised via social media that he’d been involuntarily put to recurring status last January, that his last known scenes were delivered in the fall, and that he’d changed talent agencies. But Davidson’s name and photo were never removed from Y&R’s cast list and still appear there today.

Whoever is targeting Victor, has also achieved repeated access to the Newman Ranch. This individual would need to possess special sleuthing and survival skills. Say, someone like Genoa City’s bizarrely missing Chief of Police, Paul Williams?

In what would be one of the more staggering double reveals in Y&R’s entire history, this shock reveal of Paul would make sense. If this character has truly been written out of the show, or is in the process of having that happen, then this character can not be instantly dismissed as a devolved villain.

This development would follow J.T.’s own character denigration, playing off Paul’s guilt for having positioned Luckinbill’s character in harm’s way.

Paul’s apparent final on-screen work with Rey Rosales (Jordi Vilasuso) was particularly contentious, which only played into reflective speculation about Williams’ apparent final bow. Unless, of course, the chief never really left GC, but has been in hiding, or working deep undercover?

Why hasn’t any character on The Young and the Restless mentioned one word about the head of GC’s law enforcement division? Why hasn’t Christine Blair Williams (Lauralee Bell) uttered one line of dialogue about her husband, who was leading this case? This glaring omission could very well point to an upcoming February Sweeps reveal! Come back to CDL for all of your The Young and the Restless spoilers, news and recaps!