The Young and the Restless Spoilers: Phick Crashes and Burns, Nick Done with Phyllis – See Who’s Next for Unlucky-in-Love Newman 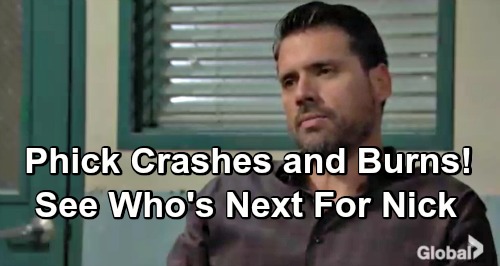 The Young and the Restless (Y&R) spoilers tease that Nick Newman (Joshua Morrow) and Phyllis Summers (Gina Tognoni) reunion may be short-lived. Their renewed romance certainly moved fast at first. Soon after Sharon Newman (Sharon Case) declared she was done with Nick, he decided to become a power couple with Phyllis. It wasn’t long until he was asking Phyllis to move in with him.

Of course, it’s easy to see that Nick was on the rebound. He cares about Phyllis, but it doesn’t seem like he’s in love with her. Nick’s lingering feelings for Sharon are undoubtedly getting in the way. Over the next few weeks, several major hurdles will hit for “Phick.” These obstacles will push them to their breaking point, so we could see this relationship explode.

For starters, Phyllis’ jealousy will remain an issue. When Nick and Sharon shared some warm moments over Nikki Newman’s (Melody Thomas Scott) health crisis, Phyllis noticed. She doesn’t like the fact that Nick is still so connected to his ex. Phyllis will do her best to hide it, but it’s clear that this is a big deal for this couple.

However, even bigger problems will quickly emerge. Phyllis is also keeping a giant secret from Nick and it involves Sharon, Nikki and Victoria Newman (Amelia Heinle). Nick’s sure to be upset when he finds out they’ve been hiding the truth about J.T. Hellstrom’s (Thad Luckinbill) death. The trust between Nick and Phyllis will take a serious hit.

To make matters worse, Phyllis will manage to put herself at odds with her own alliance. She was the ringleader of this cover-up in the beginning, but she’ll try to distance herself now. Phyllis will know that she has to look out for number one. She definitely can’t rely on the Newman family to protect her. They only take care of themselves!

The Young and the Restless spoilers say all this will bring disaster for “Phick.” They may not be able to survive these crushing blows. Once the J.T. chaos finally winds down, what’ll be next for Nick romantically? His current options are limited in Genoa City. Y&R could put Nick and Sharon back together, but it’d seem repetitive this soon.

Besides, word has it Joshua Morrow wasn’t too keen on the last “Shick” reboot and isn’t very interested in another one. Will The Young and the Restless bring back another love interest for Nick instead? Avery Summers (Jessica Collins) might be a good option. That could lead to some fantastic conflict between Avery and her sister, Phyllis.

Chelsea Newman (Melissa Claire Egan) is also a possibility, but she’d probably only be brought back with an Adam Newman recast on her arm. There’s no way Nick could truly compete with Chelsea’s love for Adam. The Young and the Restless could always bring in a fresh face for Nick, but people seem pretty tired of new characters. It sounds like Y&R will have a real romantic dilemma on their hands!

Who will Nick be paired up with next? What will his romantic future look like? We’ll give you updates as other Y&R news comes in. Stay tuned to the CBS soap and don’t forget to check CDL often for the latest Young and the Restless spoilers, updates, and news.