The Young and the Restless Spoilers: Phick Finished, Split Near – Nick Works To Clear Victor – Phyllis Works In Opposite Direction 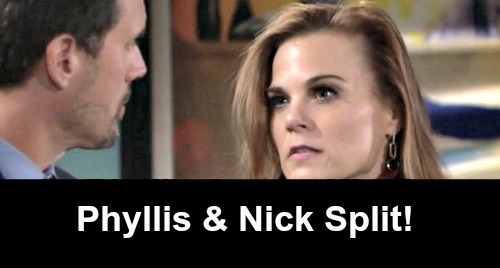 The Young and the Restless spoilers tease that Nick (Joshua Morrow) will continue working to clear his father’s name, even though these Newman men have been at odds for many months. Meanwhile, Nick’s rebound love, Phyllis (Gina Tognoni), will persist in her efforts to keep Victor (Eric Braeden) in jail.

Victor should stay in his seemingly starched blue prison jumpsuit, at least according to Phyllis. Based on the past, some (or many) devoted viewers might be inclined to agree with Miss Summers. She vividly recalls, like they do, the ugly Marco (Peter Bergman) arc. So if Victor isn’t guilty and spends the rest of his days behind bars, then so be it. Nick does not feel that way, which is somewhat surprising.

Vickie (Amelia Heinle) fully supports her father. Along with that stance, Phyllis’ problem is that no other members of the coverup crew, besides herself, are committed to keeping the facts about J.T.’s (Thad Luckinbill) accidental murder quiet now that Victor is in danger of taking the rap for what happened.

Phyllis knows that Nikki (Melody Thomas Scott), Vickie, or both will, at some point, come clean. Their love for Victor will overcome any convoluted thoughts about remaining silent, with the twisted logic being that Victor will wriggle out of Rey’s (Jordi Vilasuso) baseless charges.

Beyond Nikki and Vickie, Sharon (Sharon Case) remains seriously conflicted. She never wanted to remain silent and now, despite Mariah’s (Camryn Grimes) prodding, strongly feels that Victor doesn’t deserve to be convicted of murder. Phyllis also knows that she holds now true sway over Sharon, as the ladies remain enemies based on Shick’s split way back when and the almost-again Shick that was crushed by Phick’s reveal during the dramatic October nuptials that didn’t cross the finish line (again).

Nick’s resourcefulness is something that Phyllis will be rightfully concerned about. It now seems that Tognoni’s character was written back into Nick’s arms because Phyllis is going to play some role in either revealing the coverup crew truth to Nick, possibly by accident, or that her current proximity to him will slow his pursuit of justice.

The idea that Braeden’s character will remain in prison for as long as say, Christel Khalil’s alter ego, Lily, is misguided. Unless there’s some unknown contract issue, Braeden has returned to his regular role after what may have been a voluntary fall absence, or somewhat reduced presence on the show.

In either regard, Victor is back and should be seen often from now on, meaning that he won’t be wearing the inmate costume for that long, or be off-camera in some far off prison cell.

Nikki’s influence and Nick’s still-existing family loyalty will cause Morrow’s conflicted character to get off his Dark Horse and help his father. That part of Nick’s plot path will combine with other elements and lead to Victor’s coming clear and the overall, much needed, resolution to the J.T. storyline.