The Young and the Restless Spoilers: Phyllis and Cane Romantic Pairing in the Works – Y&R’s Surprising New Couple?

BY Heather Hughes on October 2, 2019 | Comments: one comment
Related : Soap Opera, Spoiler, Television, The Young and the Restless 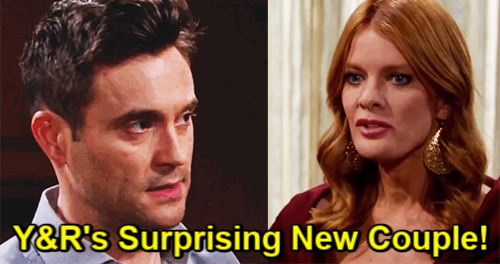 The Young and the Restless (Y&R) spoilers reveal that the CBS soap has two characters in need of love interests. Could a surprising match be brewing in Genoa City? Let’s take a look at some lonely hearts and what might be in store for them.

For starters, we have Cane Ashby (Daniel Goddard). It looked like he was going to get together with Traci Abbott (Beth Maitland) for a while, but that love story was over before it ever really started. Traci and Cane were arguably pretty cute, but some Y&R fans just couldn’t get on board. Other viewers were disappointed when “Trane” fizzled, but the pairing is kaput regardless.

Cane dropped off the map after Traci let him down gently, but he’ll be back in the action more often over the next couple months. In fact, there are some intriguing Young and the Restless spoilers to consider for October 4. Cane will manage to stir up some curiosity in Phyllis Summers (Michelle Stafford), so she’ll definitely notice of the Aussie hunk – who can be sneaky when he wants to be!

Of course, that doesn’t necessarily mean anything romantic will happen between Phyllis and Cane, but it sets up the possibility. After all, there was a reason Traci and Cane began sharing scenes. “Trane” was clearly the plan before it got abandoned by the writers. There’s no guarantee Cane and Phyllis would work for fans either, but they might be worth a shot.

That’s because Phyllis needs a love interest, too! Stafford hasn’t had one since she returned to the role earlier this year. It’s time for Phyllis to find someone she can sizzle with.

Nick Newman (Joshua Morrow) might be an option eventually, but now’s not really the right time. Phyllis has been too mixed up in all Adam Newman’s (Mark Grossman) mess for Nick to want a reunion.

Christel Khalil Will Be Returning As Lily Winters This Fall

Besides, Nick will remain drawn to Chelsea Newman (Melissa Claire Egan) despite all the issues surrounding Victor Newman’s (Eric Braeden) faked death. Phyllis needs a different man for now, so Cane might fit the bill.

Christel Khalil will pop up here and there as Lily Winters this fall, but she seemingly doesn’t want to be locked into anything. A Cane and Lily reunion can’t work long-term, so why not give Phyllis and Cane a try? It couldn’t hurt!