The Young and the Restless Spoilers: Phyllis Exposes J.T.’s Abuse At Memorial Service – Reed Has A Fit, Nick Lashes Out 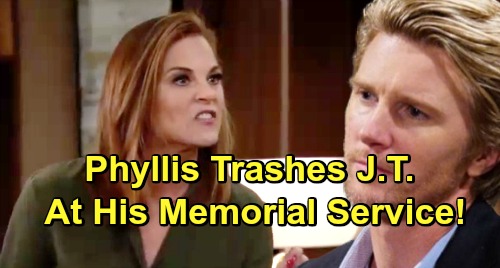 The Young and the Restless (Y&R) spoilers tease that Phyllis Summers (Gina Tognoni) will provoke Victoria Newman’s (Amelia Heinle) wrath. Thanks to all the cover-up drama, there’s already loads of tension. The members of this strange posse tend to disagree on any given day, so it’s not surprising that the conflict’s about to explode.

However, Phyllis will make this personal by ranting about Victoria’s father. Victor Newman (Eric Braeden) has orchestrated many Y&R schemes over the years. Some of them were particularly ruthless – like when Victor found Jack Abbott’s (Peter Bergman) doppelganger in a Peruvian prison and swapped him in for Jack. He brought Marco Annicelli (Peter Bergman) into Phyllis’ life without her knowledge.

Since Phyllis and Jack were at item at the time, that meant she was sleeping with evil Marco. Phyllis didn’t consent to that, so she was repeatedly violated. It’s not like Phyllis is just going to forget that Victor let a man rape her, so Victoria really has no right to fly off the handle. Nevertheless, that’s exactly what she’ll do when Phyllis compares Victor to J.T. Hellstrom (Thad Luckinbill).

After Victoria slaps Phyllis, it’ll leave the cover-up crew’s alliance on shaky ground. These two are huge factors in keeping everything together right now. Sharon Newman (Sharon Case) is always a mess anyway and Nikki Newman’s (Melody Thomas Scott) resolve has weakened now that Victor’s been charged with J.T.’s murder. It’s up to Phyllis and Victoria to keep their plan intact.

Unfortunately, Phyllis’ next tactic won’t go over well. The Young and the Restless spoilers say a memorial service will get underway for J.T. Nikki will seem on edge at the gathering, so Phyllis will do something drastic. She’ll make a speech and publicly drop the bomb that J.T. was abusive.

Phyllis will hope to create enough of a distraction to stop Nikki from making a huge mistake. She’ll succeed, but she’ll also face backlash. Victoria will be unsettled over the revelation, especially once Reed Hellstrom (Tristan Lake Leabu) lashes out. The livid teen will destroy the giant photo that’s been set up in memory of J.T. and stomp off.

Nick Newman (Joshua Morrow) will be appalled by Phyllis’ latest stunt. He’ll call her out for taking a bad situation and making it even worse. Y&R fans can expect a fierce fight for “Phick,” so we’ll see how long these two can last!