BY Marcy Cohen on May 23, 2019 | Comments: 2 comments
Related : Soap Opera, Spoiler, Television, The Young and the Restless 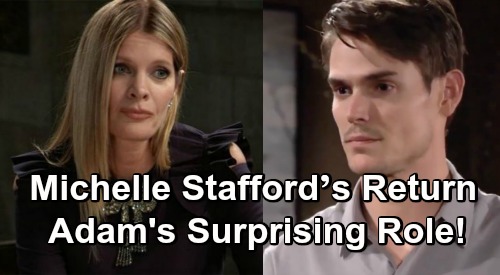 The Young and the Restless (Y&R) spoilers tease that it’ll be make-or-break-it time for Phyllis Summers (Gina Tognoni). She’ll do something risky, but that’s never been a problem for her. Phyllis is all about taking gambles if the reward could be huge. In this case, the payoff could be one of Phyllis’ greatest achievements. She’ll get an offer that’s just too good to refuse as the summer drama heats up.

Y&R fans can expect an intriguing opportunity to head Phyllis’ way. She’ll have the chance to gain a shocking and very beneficial ally. The Young and the Restless spoilers say Adam Newman (Mark Grossman) will find himself in the exact same situation. He’ll gain a stunning ally as well, so these puzzle pieces seem to fit.

This also lines up with Gina Tognoni’s recent Instagram post about sharing scenes with Grossman. She hinted that their characters would have a lot to say. In the May 23 episode of Y&R, Adam gazes as Victor Newman’s (Eric Braeden) portrait and tells “Pop” that he’s sorry. He smirks as he insists he’s about to let Victor down.

Adam doesn’t seem to have this particular alliance in mind yet, but it’d certainly push Victor’s buttons. Phyllis and Victor have excellent reasons to hate each other. Victor was responsible for bringing Marco Annicelli (Peter Bergman) into the picture. Jack Abbott’s (Peter Bergman) doppelganger repeatedly raped Phyllis since she had no idea who she was sleeping with and couldn’t give real consent.

Of course, Phyllis also turned on the cover-up crew not too long ago. She got an immunity deal, which left Victoria Newman (Amelia Heinle), Nikki Newman (Melody Thomas Scott) and Sharon Newman (Sharon Case) stuck with all the legal issues. The other ladies eventually walked free, but you can bet Victor’s holding a grudge over that and any other issues he’s faced with Phyllis over the years.

Since Adam is fine with betraying his father and Phyllis would love nothing more than to see Victor suffer, they really make the perfect partners. However, Phyllis and Adam will have to be careful. Neither one of them can be trusted, so it’s wise to be wary of each other. Phyllis may leave herself poised for what could be an amazing victory or a crushing defeat.

Will Phyllis’ apparent alliance with Adam pay off or blow up in her face? While the latter is always possible down the road, it looks like we’ll see some initial success for Phyllis. The Young and the Restless spoilers say things will turn around for her as she becomes a true Genoa City power player again.

It sounds like they’re setting up a fierce return for Michelle Stafford’s version of Phyllis. Are you excited to see what the future holds for this character? We’ll give you updates as other Y&R news comes in. Stay tuned to the CBS soap and don’t forget to check CDL often for the latest Young and the Restless spoilers, updates, and news.