The Young and the Restless Spoilers: Phyllis’ Heartbreaking Downfall – Does She Deserve What’s Coming to Her?

BY Heather Hughes on January 9, 2019 | Comments: one comment
Related : Soap Opera, Spoiler, Television, The Young and the Restless 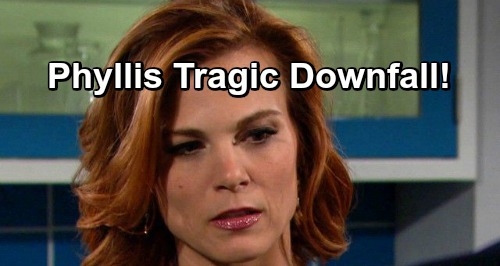 The Young and the Restless (Y&R) spoilers tease that more trouble’s brewing for Phyllis Summers (Gina Tognoni). She’s been caught up a cover-up crisis for months and things are only going to get worse soon enough. Phyllis’ love life is about to take another crushing turn as well. By the time all this is over, Phyllis may end up broken and alone. Does she deserve the devastating downfall ahead?

Let’s examine Phyllis behavior over the past few months and try to figure out if she’s horrible or just misunderstood. Perhaps it’s even a bit of both! Phyllis has her good and bad moments, so we have to consider all of them as we determine if she should get what’s coming to her.

In some ways, Phyllis got a raw deal in the whole breaking up the “Shick” wedding situation. Dumb Nick Newman (Joshua Morrow) was the one who didn’t think to have a little chat with Sharon Newman (Sharon Case) about that removed engagement ring. That certainly wasn’t proof that it was over.

As for Phyllis, she was on a break with Billy Abbott (Jason Thompson). He really had no right to fly off the handle when she was technically single at the time. Regardless, no mom deserves to have her daughter used the way Billy used Summer Newman (Hunter King). Billy’s sex revenge was disgusting and Phyllis deserves some sympathy for enduring that.

Phyllis even forgave Summer almost immediately, despite the fact that Summer had pursued Billy for weeks. They both became victims in the end, so that was an admirable move.

Of course, everything that followed proved Phyllis can also be a train wreck of a woman. She quickly got together with Nick after the “Shick” split and rubbed it in Sharon’s face. Their lightning-fast romance was inconsiderate at best and revolting at worst.

Phyllis has definitely made her fair share of mistakes in the J.T. Hellstrom (Thad Luckinbill) saga. She was the ringleader for much of this storyline. Without Phyllis calling the shots, they girls’ night gang might’ve called the cops and saved themselves plenty of trouble.

Their claims would’ve been very believable considering J.T. had just tried to kill Victor Newman (Eric Braeden) twice and Victoria had already admitted the abuse to her therapist. Nevertheless, Phyllis was convinced the police wouldn’t buy it. She also stopped several confessions later on.

After Phyllis found out Tessa Porter (Cait Fairbanks) was the blackmailer, she even implied that they should kill her. Because that’s exactly what they needed, right? Another dead body to bury! It was a little extreme considering Tessa can’t rat them out without ratting herself out, too.

Now Phyllis is all set to publicly expose J.T.’s abuse at his memorial service. The Young and the Restless spoilers say she’ll humiliate Victoria, infuriate Nick and devastate Reed Hellstrom (Tristan Lake Leabu). This obviously isn’t Phyllis’ secret to divulge, but she’ll do it in an attempt to distract and silence a nervous Nikki Newman (Melody Thomas Scott).

Phyllis is a fascinating character, so it’s great that she brings some drama to Y&R. However, we want to know if she deserves to face her imminent downfall. Do you think Phyllis should pay the price for being awful a good chunk of the time? Is she just a misjudged firecracker instead?

Whatever the case, Phyllis could face some serious charges and lose Nick over her lies. Whether she deserves it or not, chaos is looming. We’ll give you updates as other Young and the Restless news comes in. Stay tuned to Y&R and don’t forget to check CDL often for the latest Young and the Restless spoilers, updates, and news.