The Young and the Restless Spoilers: Phyllis The Smug Snitch Goes Down For Past Crimes – Shocking Secrets Come Back to Bite 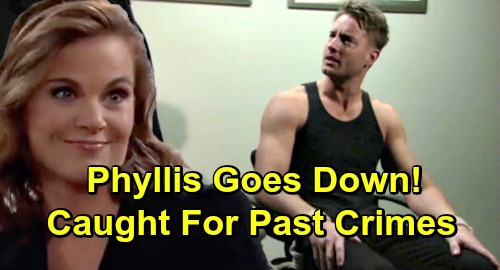 The Young and the Restless (Y&R) spoilers tease that Phyllis Summers (Gina Tognoni) will face consequences. In Tuesday’s episode, Phyllis scores an immunity deal in exchange for sharing what she knows about J.T. Hellstrom’s (Thad Luckinbill) death and the cover-up. However, Christine Williams (Lauralee Bell) warns that Phyllis had better not misrepresent the facts in any way.

In other words, the deal could go out the window if Christine learns something that doesn’t fit just right. Christine isn’t happy about making this deal, so she could be looking for any little thing to trip Phyllis up. Of course, she’d probably wait until after her star witness has taken the stand and spilled her guts to the court.

Technically, Phyllis does indeed misrepresent things a bit on Tuesday’s Y&R episode, February 19. She tells Christine that Mariah Copeland (Camryn Grimes) “MAY know something” and adds that it “could be worth asking her.” Mariah is in this just as deep as the rest of them at this point, so that’s not quite accurate.

Phyllis might be protecting Mariah somewhat for Nick Newman’s (Joshua Morrow) sake. He cares about Mariah, so it’d add to the issues in “Phick’s” relationship if she had her thrown behind bars, too. Unfortunately, Christine will have more questions soon. The Young and the Restless spoilers say the pressure will intensify for Mariah during the week of February 25-March 1.

Phyllis isn’t actually disclosing all the facts like she promised, so that could come back to bite her. You can bet Tessa Porter (Cait Fairbanks) will be dragged into all this sooner or later. Christine will inevitably want to know how girls’ night gang knew about the footage from the Dark Horse servers. Tessa was part of the cover-up, so Phyllis hasn’t squealed on parties involved.

Still, there may be no way to prove how much Phyllis knew about the blackmailer, especially since Mariah won’t be keen on ratting Tessa out. There are other possibilities for Phyllis’ ruin though. She should get what’s coming to her eventually. You can’t just snitch and expect things to go well for you on a soap!

Victor Newman (Eric Braeden) will deliver a fierce warning later this week. He’ll let Phyllis know that if Nikki Newman (Melody Thomas Scott) and Victoria Newman (Amelia Heinle) go down, there’s going to be trouble. Victor will go after Phyllis if his family pays the price for the deal she cut. Phyllis could also lose Nick over this mess.

Y&R could even take Phyllis down for another shocking crime. Is she really in the dark on who’s been framing Victor? That kind of revenge plot seems like such a Phyllis thing to do. Maybe she didn’t orchestrate it alone, but what if she had a partner in crime? Phyllis could be leaving out a crucial piece of the puzzle here.

Let’s not forget that Phyllis had Adam Newman (Justin Hartley) kidnapped and yet was never caught for that crime. With Adam returning to Y&R who’s to say she won’t pay for that crime? Phyllis could be sent to prison for decades for the Adam Newman kidnapping and many Y&R fans would be happy if she were!