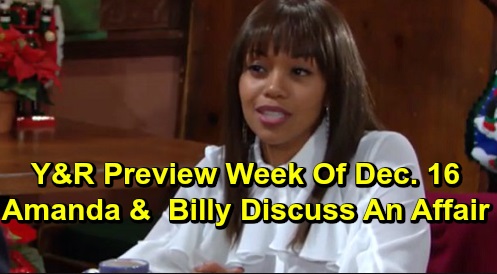 The Young and the Restless (Y&R) spoilers for the week of December 16-20 tease that we’ll see some shocking offers. Y&R’s weekly preview video promises some indecent proposals, so let’s look at all the action ahead. For starters, Adam Newman (Mark Grossman) will get an idea about how to tear Nick Newman (Joshua Morrow) and Chelsea Lawson (Melissa Claire Egan) apart.

After Adam witnesses Nick and Phyllis Summers (Michelle Stafford) looking awfully cozy, he’ll determine that maybe his partner in crime can help him out. Phyllis has certainly been known to do some scheming with Adam, so he’ll try to get her on board once again. Y&R spoilers say Adam will summon Phyllis to his penthouse and deliver an intriguing proposition. He’ll have a plan that involves Phyllis pursuing her heart’s desire.

Phyllis will wonder if Adam’s asking her to seduce her ex-husband, but Adam will insist he’s simply asking her to go after what she wants. He’ll point out that Phyllis has been circling Nick for weeks, so he’ll feel like this is her big chance. However, Phyllis will start ranting about how Adam treats her like a minion and has no respect for her. She’ll completely flip out over Adam’s pitch, but we have to wonder why.

After all, Phyllis is the queen of plotting and has certainly swooped in to steal Nick from other women before. It’s not that outrageous for Adam to suggest this based on Phyllis’ history, but perhaps that’s why Phyllis will get so upset. She may know that deep down, seducing Nick is what she really wants to do.

Nevertheless, Phyllis will decide not to tell Nick about Adam’s pitch – at least not right now. She may be able to use that as leverage when the time it right! Over with Billy Abbott (Jason Thompson), he’ll strengthen his bond with Amanda Sinclair (Mishael Morgan). However, both of them will begin to wonder about the nature of that bond. Is it strictly platonic or is there more under the surface?

The Young and the Restless spoilers say Amanda will catch Billy off guard with a question. Y&R’s weekly promo show Amanda asking, “Are you looking to have an affair?” Billy replies, “Are you trying to sleep with me?”

Based on their facial expressions and the tone of their voices, it doesn’t seem like they’ll be too serious about this – not yet anyway. Amanda may just want to know exactly what Billy’s getting out of their friendship. Y&R fans know Billy feels it’s easier to open up to Amanda. He hates not being able to confide in Victoria Newman (Amelia Heinle) the way he should, but he’s enjoying having Amanda to lean on.

Amanda seems to be appreciating these chats as well, so what’s up with their growing connection? Once the affair idea’s in Billy’s head, could he end up considering it? Regardless, The Young and the Restless spoilers say Billy’s about to play a very dangerous game!

It sounds like some exciting episodes are on the way. We’ll give you updates as other Y&R news comes in. Stay tuned to the CBS soap and don’t forget to check CDL often for the latest Young and the Restless spoilers, updates and news.