BY hellodrdavis on February 11, 2019 | Comments: one comment
Related : Hot News, Soap Opera, Spoiler, Television, The Young and the Restless 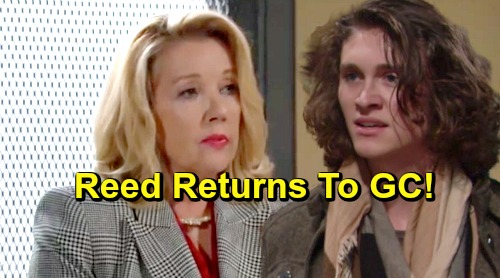 The Young and the Restless spoilers has some good news to pass on about the return of a popular Y&R star. Reports say that Tristan Lake Leabu is returning to Y&R to reprise his role as Reed Hellstrom. When last we saw Reed, he was headed back to school after the disastrous memorial service for his father, J.T. Hellstrom (Thad Luckinbill).

At the memorial service, Reed was devastated to learn from Phyllis Summers (Gina Tognoni) that J.T. had physically and emotionally abused his mother Victoria Newman (Amelia Heinle). The young man clearly has conflicted feelings about his father, but at least he has had his family there for support.

But now some new developments have arisen in the J.T. murder investigation that will likely send Reed straight back to Genoa City for answers. His grandfather Victor Newman (Eric Braeden) was formally charged for J.T.’s murder, which ultimately led his grandmother Nikki Newman (Melody Thomas Scott) to confess to the murder.

Reed is going to be horrified to learn through the media that his beloved grandmother is the one responsible for his father’s death. And while it’s not yet clear exactly what will bring Reed back to Genoa City, it’s likely going to be related to his grandmother’s confession. Reed may want to hear directly from his grandmother what went down.

Of course, Reed and his grandmother have been through a lot lately. Reed was the one driving the car that hit and nearly killed Nikki several weeks ago. The two got through that ordeal, but will they be able to work through the fact that Nikki killed Reed’s father?

Time will tell, but one thing’s for sure. We can look forward to some gripping scenes as Reed confronts his grandmother and demands the truth about what happened. Of course, that may mean that he’ll hear how J.T. was in the act of physically harming Victoria when Nikki killed him. None of this will be easy for Reed to hear.

No word yet on exactly when Reed will return or how long his next stint in Genoa City will be. We’ll keep you updated on the details as they become available.

Are you looking forward to Reed’s return? Stay tuned to the CBS soap and don’t forget to check CDL often for the latest Young and the Restless spoilers, updates, and news.