The Young and the Restless Spoilers: Rey and Sharon Happen – But Can Shey Survive Mia’s Nasty Scheme? 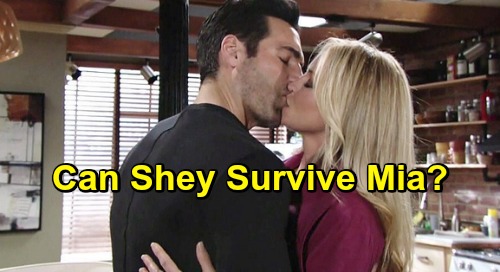 The Young and the Restless spoilers tease that Sharon (Sharon Case) and Rey (Jordi Vilasuso) have finally gotten together. But will this long-teased new couple be able to sustain a relationship?

Mia (Noemi Gonzalez) is out of her husband’s life, despite the fact that she’s claiming to be carrying his child. She and viewers know that the expectant baby story was the latest desperate attempt to save Ria. Mia faked her pregnancy test by having paid a pregnant mother, who was conveniently written into a recent hospital scene, to provide a sample. The specimen was used later that day when Rey, as expected, requested supposed scientific proof of his wife’s motherly status.

Rey doesn’t even know about Mia’s faux pregnancy test result. Instead, he ended Ria due to his love for Sharon and because of his brother. Mia’s impulse-tell about Arturo (Jason Canela) was just plain mean. At the same time it seemed to once again underscore her feelings being deeper for Arturo, then they likely ever were, or are for Rey.

The baby issue has been raised for two reasons. As fans know, Canela is leaving the cast. Assuming no recast, Arturo will be written out in some fashion. That could imply that Mia will be able to further her paternity ruse, keeping Rey tied to her, which would make sense as she may not have Arturo to fall back on.

No matter what Rey believes today, his feelings will be radically impacted if he comes to see the child Mia bears. This projection is made with the belief that Arturo is the father of Mia’s child, which she is assumed to actually be having now.

Sharon has her own children, as Rey knows. But Sharon’s youngest child is Faith (Alyvia Alyn Lind), whereas Rey’s youngest offspring would be a newborn and he’d believe that he’s a first-time parent.

Any future storyline that involves Mia’s continued presence in Rey’s life would jeopardize whatever relationship he forms with Sharon. If Mia doesn’t find another man to love, or at least be linked to, she will maintain Mr. Rosales as her default option. That spells trouble for Sharon, who surely won’t be inclined to keep Rey from his perceived daughter, or son.

Shey has the potential to become a lasting Y&R couple. Case and Vilasuso are daytime veterans, each possessing strong acting chops. They work well together and their character’s exhibit solid chemistry. But, as noted, Mia could remain in the mix, which would jeopardize the Sharon-Rey match.