The Young and the Restless Spoilers: Shadam vs. Shey, War for Sharon’s Heart Begins – Which Man Should She Choose?

BY Heather Hughes on May 11, 2019 | Comments: Leave Comments
Related : Soap Opera, Spoiler, Television, The Young and the Restless 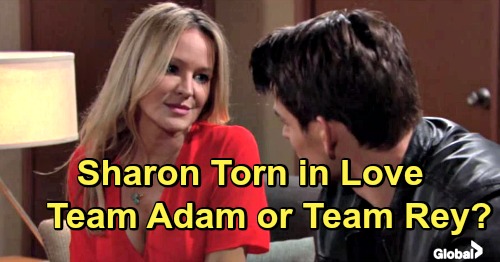 The Young and the Restless (Y&R) spoilers tease that a war for Sharon Newman’s (Sharon Case) heart may be brewing. She recently kicked off a committed romance with Rey Rosales (Jordi Vilasuso), but Adam Newman’s (Mark Grossman) return has suddenly put their future in jeopardy. Sharon can’t stop talking about their undeniable connection and the intensity of the relationship they used to have.

With that in mind, we have to ask which couple you’re rooting for. Should Y&R stick with “Shey” or is a “Shadam” reunion the way to go? They seem to be starting a love triangle here – at least that may be what happens after some or all of Adam’s memories return. He may recall the same intense bond Sharon’s been talking about. It’d be easy for The Young and the Restless to pair them back up.

Of course, the fact that this is a recast changes the game a bit. Some loyal “Shadam” lovers are fine with it. The history’s there and Mark Grossman is a hunk, so why not? Others feel like Grossman looks too young or they’re waiting to see what the chemistry is like first.

However, Y&R probably knew what they were doing here. Grossman likely had a screentest with Case, so they may be confident in the spark. If “Shadam” shines and “Shey” still sparkles, which pairing should they go with? It could be a tricky decision, but the best love triangles are the ones where both sides are good options.

On Twitter, The Young and the Restless fans have been weighing in on the great “Shey” and “Shadam” debate. “I actually like #Shey, but I was a huge #Shadam fan,” one viewer said. “It all comes down to the chem. If it works, I am there.” Another Y&R watcher had a different take. “I’m 100% Team #Shey and a Shadam friendship.”

Other fans are more focused on supporting Sharon herself – no matter her heart may take her. “I am totally #TeamSharon ultimately,” one viewer insisted. “I am really loving #Shey a lot. But I am very interested in #Shadam, wherever that goes.”

Are you on “Shey’s” side or has the idea of a “Shadam” reunion already won you over? The Young and the Restless spoilers say some hot drama’s ahead either way, so stay tuned. We’ll give you updates as other Y&R news comes in. Stick with the CBS soap and don’t forget to check CDL often for the latest Young and the Restless spoilers, updates, and news.