The Young and the Restless Spoilers: Sharon Betrays Phyllis After Rey Discovers Her 911 Call From Night J.T. Disappeared 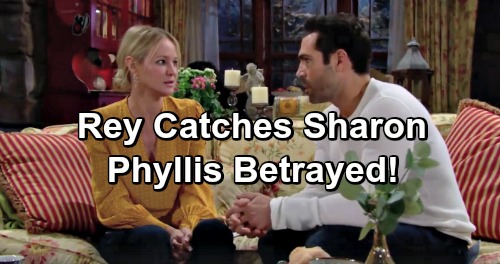 The Young and the Restless (Y&R) spoilers tease that Sharon Newman (Sharon Case) will get a huge shock. She’ll open her door to find Rey Rosales (Jordi Vilasuso) on a mission to pour his heart out. Sharon will let Rey in the cottage for a long discussion about their feelings. They’ll want to address their lingering spark and what it could mean for their future together.

Mia Rosales (Noemi Gonzalez) is clearly hung up on Arturo Rosales (Jason Canela). That’ll be evident when she shouts Arturo’s name during a passionate moment with Rey. Y&R spoilers say it’ll be what gives Rey the courage to dump Mia and move on with Sharon.

However, Sharon and Rey’s romance will get off to a rocky start. It could be over before it ever truly begins! The Young and the Restless spoilers state that Sharon will be doing her taxes just before Rey’s visit. She’ll have important papers scattered everywhere, so she’ll shuffle them a bit to make room on the sofa.

Since Rey is a detective, being nosy is in his nature. Rey’s always looking for any little clue that might jump out at him. He’ll find one when he spots an old phone bill from April of last year. As Rey scans the list of numbers Sharon called, one will make his heart sink.

Rey will notice that a brief 911 call was made the night of April 13, which happens to be the night J.T. Hellstrom (Thad Luckinbill) disappeared. Nikki Newman (Melody Thomas Scott) will already have made a confession at this point, so red flags will be raised. It won’t be hard for Rey to guess that Sharon was there and involved in the cover-up.

The Young and the Restless spoilers say Rey will confront Sharon with the new evidence. He’ll wave the phone bill around and demand answers about that crucial call. Rey will push Sharon to respect their friendship and spill the real story. If he means anything at all to Sharon, he’ll want her to tell him the truth.

Y&R viewers can expect Sharon to crumble under the pressure and betray her cover-up crew partner. Since a risky alliance will be exposed by the end of the week, February 11-15, it sounds like Sharon will confirm her involvement along with Phyllis Summers’ (Gina Tognoni) part in the chaos. We’ll give you updates as other news comes in. Stick with the CBS soap and don’t forget to check CDL often for the latest Young and the Restless spoilers, updates, and news.