The Young and the Restless Spoilers: Sharon Bullied – Nick’s A Hypocrite, Wrong Again

BY Sean O'Brien on January 28, 2019 | Comments: one comment
Related : Soap Opera, Spoiler, Television, The Young and the Restless 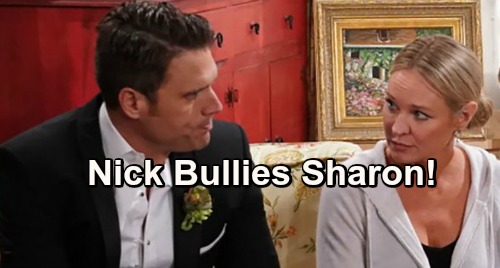 The Young and the Restless spoilers tease that Sharon (Sharon Case) does not deserve Nick’s (Joshua Morrow) latest verbal tongue-lashing. Yes, she became an eventual willing member of the coverup crew. But she never had his mother or sister’s permission to rat on her cohorts and so Sharon didn’t.

Nick’s moralizing is rich! He’s the infamous guy who took up with Phyllis (as then played by Michelle Stafford) after Cassie (Camry Grimes) died in 2005. That singular choice altered the course of Shick’s lives and those of so many other Genoa City residents, including Mariah’s (also played by Grimes in a dual role) to this very day. And now he wants to lambaste poor Sharon for not telling him about Nikki’s actions? Give this soap world a break!

By what right does Nick think he was, or is, owed an explanation? Having taken Sharon for granted for oh so many years, Sharon and her fans are not surprised that Lord Nicholas is acting this way, however. So Newman of him to do so and, as always, completely unaware of how haughty he looks as a result.

Meanwhile, at the exact same time, Nick’s chosen to instantly believe Phyllis (as now played by Gina Tognoni) where the fireplace poker is concerned. That was based on no evidence, other than her alluring smile.

It’s true what Sharon said a handful of months ago. Phyllis brings out Nick’s bad side, one that he seems to revel in. She’s the basic bad influence personified.

Consider the contrast between the children Sharon had through Nick, Noah (Robert Adamson) and Faith (Alyvia Alyn Lind), and the one Phyllis produced through him, Summer (Hunter King). On the one side there are two good, loving kids.

On the other, a mini-me manipulator hewn in the image of self-centered Phyllis. Super Girl at one time in her youth, yes. But into young adulthood, Summer has become like her mother, misguided, at best.

Nick is making the classic mistake of quarterbacking his Monday morning. Anyone can look at a result and then impose, after the fact, what they think others should have done.

In this instance, Nick believes that Sharon should have told him what happened because they were engaged. All the while, he was withholding his J.T. (Thad Luckinbill) mimic escapade, which was definitely not something he was forced into doing, as was true with Sharon.

If Sharon had told Nick what happened, there’s no telling what would have resulted, or if everyone would have been in any different position then they are now. But Nick has long thought he knows how Sharon should live her life, which is the real reason why they haven’t been able to remarry.

Shick isn’t equal, in Nick’s mind. Accusing Sharon as he has further cements that long-held point. CDL is a leading source for everything linked to The Young and the Restless. Check back regularly for Y&R spoilers and news!