The Young and the Restless Spoilers: Sharon Says No To Adam’s Marriage Proposal, For Now

BY Sean O'Brien on August 17, 2019 | Comments: one comment
Related : Soap Opera, Spoiler, Television, The Young and the Restless 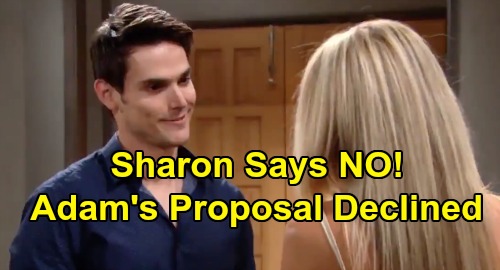 The Young and the Restless spoilers tease that Sharon Newman’s (Sharon Case) rejections of Adam Newman’s (Mark Grossman) blurted marriage proposal isn’t surprising. Sharon knows that Adam doesn’t love her the most and is merely trying to front stability for a current and a coming custody case.

However, savvy Y&R fans know that a Shadam reunion has now been officially teased three times. The first retro overture happened in Las Vegas, Nevada. That’s when Sharon agreed to Victor Newman’s (Eric Braeden) request that she help him try to restore Adam’s then clogged memory.

The subsequent flirtations that Rey Rosales (Jordi Vilasuso) saw were real, despite Sharon’s repeated denials and excuses. Eventually, Adam’s butt-in’s and purposeful pokes at Shey proved to be too much, as Rey ended what he just started with Sharon.

It was odd that the long-teased Shey pairing would be formed only to end shortly thereafter. Y&R hadn’t appeared to turn course, as the recast of Adam, in the form of Grossman, was written into the scripts. So, will Shey’s split mean that Shadam returns soon?

The Young and the Restless preview of a Sharon and Adam redo gained legitimacy because of what recently happened at the penthouse. That romantic reconnect left no doubt that Sharon is still interested in Adam. Yet, it’s obvious, even to Sharon, that Chelsea Boudreau (Melissa Claire Egan) remains Adam’s top choice.

Many plot points are currently floating in the daytime air, which makes developing storylines unpredictable. Rather than muddled, Y&R is skillfully presenting various current and future options to the audience.

Maybe another retry with Rey, as appears to be building, leads nowhere, or Vilasuso’s character does something that makes Sharon mad and she impulses into an eloped marriage with Adam. Possibly, Adam settles down and presents himself sincerely to Sharon, who wears down over time.

Yes, the reverse SORAS of Adam presents challenges for hardcore fans. But the entire audience isn’t old school, which the early 2010’s represent at this time. And even those who are longtime fans, dating back well before this decade began, aren’t all opposed to Sharon being with Adam now.

Sure, Sharon had no interest in this character when he was being played by Justin Hartley (Adam) from 2014-2016. But circumstances in her life and his have changed, significantly, since then.

Adam with Sharon makes sense because he needs her right now. Sharon with Adam isn’t a current fit, which is why she’s resisting. But the passion, sympathy, and admiration she has for him is undeniable.

So an exact question wouldn’t only focus on if Shadam will happen. Instead, questions would involve how and when this one-time electric couple can start all over again? CDL is a leading source for everything linked to The Young and the Restless. Check back regularly for Y&R spoilers and news!