The Young and the Restless Spoilers: Sharon’s Got Competition, Rey Grows Closer to Victoria – ‘Vey’ on the Way? 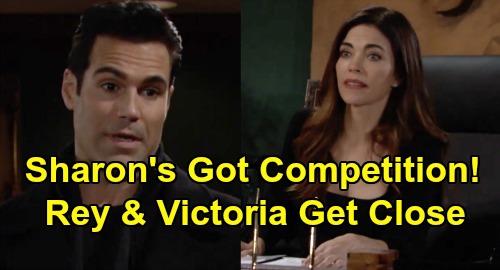 The Young and the Restless (Y&R) spoilers tease that Sharon Newman (Sharon Case) may have some competition soon. Y&R fans know Sharon and Rey Rosales (Jordi Vilasuso) finally got their romance back on track. It took some work to make this reunion happen, but Sharon’s established some boundaries with Adam Newman (Mark Grossman) and Rey trusts her.

What about Rey though? Can he be trusted? It seems that way now, but anything can happen once sparks start flying! The Young and the Restless spoilers say Rey Rosales (Jordi Vilasuso) will end up stopping by Newman Enterprises, where Victoria Newman (Amelia Heinle) will be working late.

In a Y&R preview video for the week of December 2-6, Rey and Victoria discuss the terrible storm that’s hit. Victoria asks how bad it is, so Rey admits it’s pretty nasty out there. He talks about the wind knocking down a few trees and suggests things are only going to get worse. Moments later, the room’s plunged into darkness. Victoria quickly rises out of the CEO chair and wonders what’s happening.

We’d say what’s happening is a blackout and some chem testing! Billy Abbott (Jason Thompson) hasn’t been feeling very fulfilled lately, and Victoria’s been pretty focused on work. She’s been supportive of Billy, but he seems to need more attention than she’s willing to offer right now. Amanda Sinclair (Mishael Morgan) will be busy giving Billy that attention at a dive bar across town.

It’ll be interesting to have Billy leaning on someone else and perhaps Victoria leaning on someone else, too. Victoria and Rey should have some time to kill while they wait on the worst of the storm to subside. They might light some candles or get a backup generator going. We should mention that Victoria will receive an apology that surprises her, and it appears it’ll be from Rey.

Rey may be apologetic about how he treated Victoria and the others during the J.T. Hellstrom (Thad Luckinbill) cover-up chaos. He felt he had to do his job and seek justice, but he ultimately tried to undo the damage. Rey was a crucial part of the plan to free Victoria, Sharon and Nikki Newman (Melody Thomas Scott).

J.T. was revealed to be alive and it all worked out, but Rey may still be sorry for the lowest points. Victoria was an abuse victim, and the trial made her pain even worse. Of course, Rey also arrested Victoria after Adam Newman (Mark Grossman) framed her for the pill tampering. He may hope Victoria’s forgiven him for that, and she surely has since Victor Newman’s (Eric Braeden) plan led to the drama.

This should be an intriguing night that brings Victoria and Rey closer. Should Sharon be worried? Will Rey find himself drifting in Victoria’s direction eventually? Is “Vey” on the way?