The Young and the Restless Spoilers: Shocking Y&R Affair Story – Will Lauren Choose Jack or Stay Loyal to Michael?

BY Heather Hughes on May 7, 2019 | Comments: Leave Comments
Related : Soap Opera, Spoiler, Television, The Young and the Restless 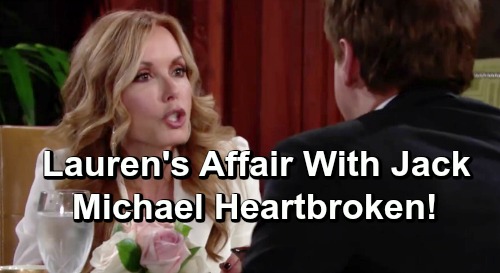 The Young and the Restless (Y&R) spoilers tease that Jack Abbott (Peter Bergman) will spar with Lauren Baldwin (Tracey E. Bregman) later this week. They had some nice bonding moments recently, so this will seem like a setback – at least at first. However, this confrontation will probably just end up pulling them closer.

Phyllis Summers (Gina Tognoni) hacks Jabot’s servers in Tuesday’s Y&R episode, so there could be trouble thanks to how she uses the info she finds. Perhaps Phyllis’ actions will spark Jack and Lauren’s fierce fight. They may clash over the damage that’s done and how it should be handled.

Since Lauren and Jack have kind hearts, they won’t be able to stay angry for long. They’ll inevitably soften toward each other, which could bring a warm embrace and the start of more than friendly feelings. The Young and the Restless spoilers for May sweeps say Jack will see someone he has a past with in a new light. Lauren seems like the perfect fit based on how things are playing out so far.

This is a tricky situation since there are pros and cons to potentially pairing Jack with Lauren. For starters, Lauren actually looks good with Jack and is in the right age range. If they were paired up, it would be refreshing to see Jack with someone who doesn’t look young enough to be his daughter.

“Kerry Johnson” aka Dominique Caroll (Alice Hunter) just wasn’t a good match for Jack. It’s one thing to have one half of the pairing be a few years younger than the other half. It’s quite another to have a 36-year age difference between actors, which was the case for Bergman and Hunter. Bregman is only a decade younger than Bergman, so that’d be progress!

Lauren and Jack also have a history to revisit, so it wouldn’t be entirely out of left field. However, we can’t help but think about Michael Baldwin (Christian LeBlanc) here. He’s been nothing but a kind, devoted husband lately. Michael doesn’t deserve to be cheated on!

Plus, every soap needs at least one or two stable couples they don’t mess with. Michael and Lauren should really fall into that category by now. Nevertheless, Y&R doesn’t seem to think hiring a new age-appropriate love interest for Jack is a good idea. Since they won’t do that, what are their options? That may be why they’re at least considering a Jack and Lauren pairing.

The Young and the Restless spoilers hint that Jack will struggle with complicated feelings soon. Will he make his move? How will Lauren react if he does? There’s a chance Lauren will stay strong and prove she’s loyal to Michael. However, there’s also a chance she’ll surrender to temptation and kick off a devastating affair.

That could bring suspicions for Michael eventually, so stay tuned for some hot drama. We’ll give you updates as other Y&R news comes in. Stick with the CBS soap and don’t forget to check CDL often for the latest Young and the Restless spoilers, updates, and news.