BY Heather Hughes on December 5, 2019 | Comments: one comment
Related : Soap Opera, Spoiler, Television, The Young and the Restless 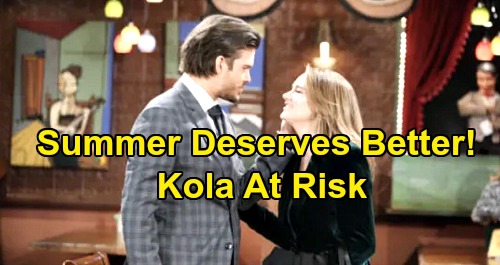 The Young and the Restless (Y&R) spoilers tease that Summer Newman (Hunter King) and Theo Vanderway’s (Tyler Johnson) abrupt breakup could spark an interesting debate. In the episode airing December 4, Summer misunderstands Theo’s comment and assumes he wants to live together. Theo picks up on Summer’s hesitation regarding taking that step and ultimately dumps her at the office later.

Is Theo being fair here? It’s true that Summer seems like she’s been holding back somewhat – and that may be partially due to her lingering feelings for Kyle Abbott (Michael Mealor). However, it’s not like Theo’s been the perfect man. In the same episode, Theo complains that they only talk about stuff on the surface. He doesn’t feel like there’s much substance to their relationship, but Summer isn’t solely responsible for that.

Theo came to town as the ultimate party boy. They both decided on a more casual romance, so Theo should’ve pushed for something deeper if that’s what he wanted. Instead, he’s choosing to blame Summer for never asking and just dumping her out of nowhere.

Furthermore, it’s not entirely true that they’ve never gone deeper than the surface. Summer listened as Theo opened up about his dead dad. She’s also given Theo pep talks during his career struggles, but apparently Theo only wants to remember the ones he’s had with Lola Abbott (Sasha Calle) – a married woman that he’s admitted he wishes he’d met before Kyle.

While we’re on the topic of other women, is this not the same man who was hitting on Tessa Porter (Cait Fairbanks) less than three months ago? The same Theo who said he didn’t believe in labels when Tessa insisted she was gay and in a committed relationship with Mariah Copeland (Camryn Grimes)? We can’t forget that Theo got himself fired for trying to steal Mariah’s job on multiple occasions.

Redemption is certainly possible on Y&R, but Theo can’t just decide he’s a changed man and expect everyone to accept it instantly. Why on earth wouldn’t Summer be hesitant about this guy? Theo was a walking red flag – including when he summoned Zoe Hardisty (Anna Grace Barlow) to town and tried to derail “Kola’s” wedding reception. His obsession with destroying Kyle’s world was out of control.

Summer has every right to proceed with caution. She’s actually gone to bat for Theo with Kyle several times, so it’s not like she’s ignoring the positive changes. Theo has indeed settled down, but it doesn’t seem right for him to act like he’s suddenly this consummate professional when he was a total train wreck not too long ago.

If Theo expected something more from Summer, he should’ve been honest about it. They could’ve made a mutual decision to move forward together or part ways romantically. This is more like a power trip on Theo’s part designed to make Summer suffer. It feels like Theo wanted to be the one doing the dumping.

Of course, this isn’t a new theme on The Young and the Restless. It’s just the latest in a string of breakups where the woman has to seem needy and distraught. Take Abby Newman (Melissa Ordway) and Nate Hastings’ (Sean Dominic) breakup, for example.

Nate willingly signed up for Victor Newman’s (Eric Braeden) fake death plot. He contributed even more than Abby did, but he basically dumped her because she didn’t feel bad enough about it. Similarly, Theo was on board with this casual arrangement. Despite Theo trying to play the field with Tessa in September, it’s Summer who’s created the distance in Theo’s eyes.

Theo thinks maybe Summer’s trying to keep her options open, but that’s what he did, too. He literally told Tessa “there’s a great big world to explore.” That felt mostly like a calculated move in Theo’s failed plan to target Mariah, but the point is Summer had good reasons to put up walls.

Bottom line, this breakup is probably for the best, but Theo shouldn’t be acting all high and mighty about it. The distance between them is every bit as much Theo’s fault – especially since he’s been leaning on Lola so much lately. He can’t blame Summer for connecting with Kyle when he’s doing the same thing with Kyle’s wife. Summer’s made her fair share of mistakes, but she still deserves better.