The Young and the Restless Spoilers: Summer Frustrated, Decides What She Really Wants – Forces Theo’s Commitment

BY Heather Hughes on November 29, 2019 | Comments: one comment
Related : Soap Opera, Spoiler, Television, The Young and the Restless 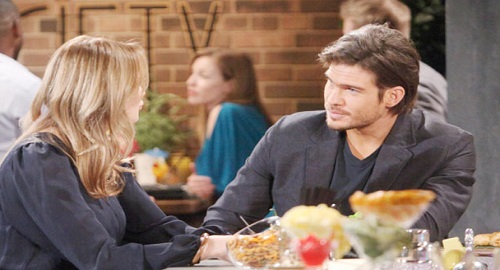 The Young and the Restless (Y&R) spoilers tease that Summer Newman (Hunter King) will have to reflect on her love life and what she really wants. During the week of December 2-6, Summer will consider her future – specifically, how Theo Vanderway (Tyler Johnson) fits in it. Y&R fans know Summer and Theo have always kept things pretty casual. Even when Summer thought Theo was moving to Paris, she wasn’t exactly broken up about it.

Summer would miss hanging out with Theo, but nothing about this relationship has ever felt serious or meant to last. Of course, Summer remains drawn to Kyle Abbott (Michael Mealor) and considers him her closest friend. They have a special bond and understand each other, so she can’t help but compare that bond to the one she has with Theo.

There have been several times when Summer seemed frustrated that Theo wasn’t more like Kyle. However, the truth is Theo can’t be a Kyle replacement. The whole reason Summer was into Theo in the first place is that he wasn’t like Kyle. She was hurting after the “Skyle” split and looking for a no-strings-attached romance. Kyle was all in on his commitment to Lola Rosales Abbott (Sasha Calle), so Summer rejected the idea of commitment at all.

Things may have changed for Summer at this point. She’s seemingly matured a lot over the past few months and her heart has healed in some ways. It’s obvious Summer’s still pining for Kyle, but she’s not home crying her eyes out or feeling sorry for herself. Summer may be over her commitment phobia, so that could lead to this reexamining of her relationship with Theo.

It’s possible Summer will push for a talk with Theo about what’s next. She may want to know if Theo cares about her enough to make this something that could last. If Theo’s on the same page about committing and putting in the work, that might be something Summer’s open to.

On the other hand, Summer may assume that’s something Theo isn’t interested in or capable of. She might tell him that this just isn’t going to work for her anymore. Theo could be hurt that Summer didn’t give him a chance to get on the same page. It’s easy to imagine a conversation like this leading to a blowup.

There’s also a possibility Summer will indeed give Theo that chance, but he won’t be able to give her what she wants. Theo’s got a new job at Jabot and may feel like that has to be his priority. Bottom line, there are a lot of ways for “Seo” to go south in the coming episodes. It makes sense for The Young and the Restless to have them crash and burn.

This could set up Kyle comforting Summer and Lola comforting Theo. Those seem to be the couples Y&R’s gearing up for right now, so things are bound to keep shifting. The Young and the Restless spoilers say some great drama’s looming in Genoa City. We’ll give you updates as other news comes in. Stay tuned to the CBS soap and don’t forget to check CDL often for the latest Young and the Restless spoilers, updates and news.