The Young and the Restless Spoilers: Summer Shakes Up GC – Returns Pregnant With Billy’s Baby

BY hellodrdavis on January 13, 2019 | Comments: one comment
Related : Soap Opera, Spoiler, Television, The Young and the Restless 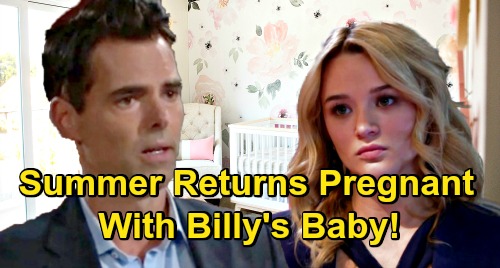 The Young and the Restless spoilers tease that Summer Newman (Hunter King) is headed back to Genoa City. Several weeks ago, Summer left to work for Victor Newman (Eric Braeden) overseas, and we haven’t heard a peep from her since.

The deal was that she was supposed to be mentored by Victor, but clearly that hasn’t happened, given that Victor went missing-in-action and then showed up at NIkki Newman’s (Melody Thomas Scott) bedside in GC.

It certainly looks like Summer will return to GC disillusioned by the great opportunity she was supposed to have with Newman Enterprises. Who knows, she may want to reclaim her old life in GC and get her position back at Fenmore’s.

One thing’s for certain. Phyllis Summers (Gina Tognoni) and Nick Newman (Joshua Morrow) will be thrilled to have Summer back. Neither of them was happy with Summer’s decision to leave GC, and they aptly predicted that Victor would abandon Summer and let her crash and burn. They’ll be glad to have their daughter home.

Or will they? There’s a very distinct possibility that Summer may return to GC with some stunning news. Viewers will remember that shortly before Summer left for her new position overseas, she slept with Billy Abbott (Jason Thompson). At the time, she thought that she and Billy were becoming a real couple, but for Billy the sex was all about revenge. Summer ended up devastated and promptly wrote Billy off.

But was that really the end of her association with Billy? What if Summer ended up pregnant as a result of that one night with him? That would be a pretty good reason for her to return home to GC now.

Given how pregnancies are usually rushed along on soaps, Summer could return to GC a few months pregnant and showing. Imagine everyone’s surprise if Summer walks back onto the scene in maternity clothes and with a baby bump?

Of course, Phyllis and Billy would know right away what’s up, but Nick would be absolutely stunned. Nick currently has no clue that Billy and Summer slept together, but if Summer comes back home pregnant, then Nick’s going to find out in due time, and he won’t be happy about it. In fact, it would set up some major Nick-Billy conflict.

Do you think Summer will shake things up by returning home pregnant? Stay tuned to the CBS soap and don’t forget to check CDL often for the latest Young and the Restless spoilers, updates, and news.